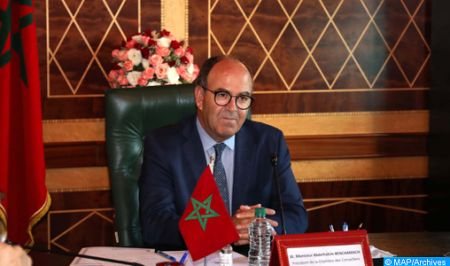 The Speaker of the House of Advisors Hakim Benchamach reaffirmed, on Thursday, Morocco’s position of constant support for the inter-Libyan dialogue, as well as the Kingdom’s commitment to supporting the efforts to overcome all the obstacles that hinder the consolidation of the consensual political solution between all parties. “Morocco is committed and involved in strengthening the dialogue between the Libyan brothers in order to reach a final political settlement to the crisis”, said Benchamach during his meeting with the president of the Libyan High Council of State Khaled Al Mechri, adding that the Kingdom believes that the consensual political solution remains the only way out of the crisis. He reiterated his confidence in the ability of the Libyans to reach a final solution that satisfies all parties, and meets the aspirations of the Libyan people for security, stability and development, said a statement from the House of Advisors. Benchamach also affirmed the permanent readiness of the Kingdom to contribute to achieving the expectations of the Libyan people for the establishment of the rule of law and institutions. For his part, Al Mechri praised the active role played by Morocco in order to reach a consensual political solution on the Libyan issue, considering that the role of the Kingdom has been decisive in bringing closer points of view between the different parties and reaching  consensus likely to pave the way for a final political settlement to the Libyan crisis. Morocco offered all the conditions to the Libyan parties to reach an important consensus, he said, citing the Skhirat agreement, signed on December 17, 2015, as well as the Tangier and Bouznika stages which have made it possible to bring closer the positions of the various Libyan parties. He said he is confident and optimistic about the possibility of transcending all obstacles and moving forward on the path of building a democratic and unified state, adding that the elections scheduled for December 24 in Libya will help with the consolidation of the democratic process, the building of institutions and the fostering of stability in the country.