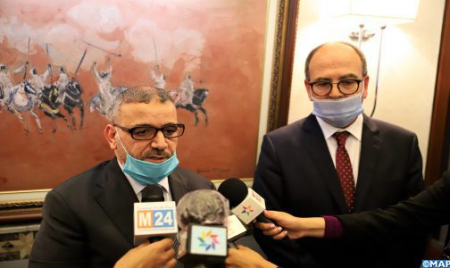 The president of the Libyan High Council of State, Khaled Al Mechri, underlined, Thursday in Rabat, the strong support and the active role of Morocco in all stages aimed at the settlement of the Libyan crisis. “We are pleased with our presence in the brotherly country of Morocco, a country which has always been an active player in all stages aimed at ending Libyan crisis”, Al Mechri told reporters at the end of his talks with the Speaker of the House of Advisors (upper house), Hakim Benchamach. “During every visit to Morocco, we feel that we are among our relatives, our brothers and our friends, and we enjoy the benevolence of His Majesty the King and the government as well as the hospitality of the Moroccan people,” he said. He also welcomed, in this regard, the positive positions of the Kingdom to contribute to the settlement of the Libyan crisis. The president of the Libyan High Council of State underlined the importance of Moroccan initiatives aimed at reaching consensus on some Libyan issues which still cause controversy, saying he is optimistic about these initiatives between the Libyan stakeholders of the High Council of State and the House of Representatives. Al Mechri stressed that these good offices, which have not been stopped since 2014 and led to the Skhirat Agreement in 2015, will pave the way to holding parliamentary and presidential elections at the end of this year.