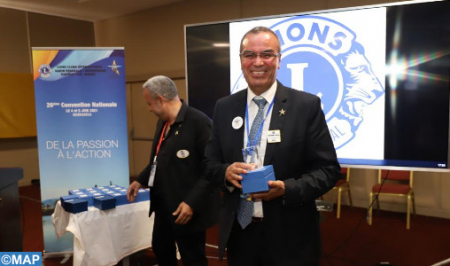 Mohamed Afailal will be from July 1, 2021, the new Governor of Lions Clubs International, District 416- Morocco, replacing Karim Essakalli. During an Ordinary General Assembly held Saturday in Marrakech, as part of the 26th National Convention of Lions Club Morocco, Mr. Afailal presented his action plan for the 2021-2022 period under the sign “United for diversity”, as well as the members of its working team. Afailal underlined that the 26th National Convention of Lions Club Morocco represents a solemn moment through which Lions Club Morocco celebrates the excellent and brilliant record of several achievements, before paying a tribute to Mr. Essakalli for his work at the head of District 416- Morocco. He also stressed the need to maintain this pace and give the necessary impetus to remain at the same level of performance. Regarding his provisional action plan, Afailal expalined that his first objective is to develop and consolidate the flagship actions initiated and agreements signed during the 2020-2021 period, noting that it is also a question of putting in place a concerted development strategy by 2025. The objective is also to develop and improve the coherence of the workforce, to develop quantitatively and qualitatively the training of future leaders of the District, and to improve the influence of the lions at the regional and international level, he pointed out. This provisional action plan, he said, can improve the mode of governance, restructure the functional organization of the District, create new centers to improve the effectiveness and efficiency of activities underway by the District. He also highlighted the major projects to be pursued in 2021-2022, namely: the diabetic retinopathy project at the level of the Oriental region, the agreement with the ministry of National Education, Vocational Training, Scientific Research and Higher Education, the project with the ministry of Social Solidarity, relating to cochlear implants for deaf children and the expansion of the network of establishments dedicated to children suffering from deafness and more generally those with special needs in Fez and Fqih Ben Saleh. On this occasion, the activity and financial reports of Lions Club Morocco and the reports of the activities of the Regions were presented. In an address on this occasion, Mr. Essakalli gave a detailed overview of the actions carried out during his mandate, in particular the signing of a partnership agreement with the ministry of National Education, Vocational Training, Higher education and Scientific research allowing the Club to use hpublic schools as spaces for social actions. He also mentioned the launch by the Club Rabat Doyen, the Lalla Asmae Foundation, the ministry of Solidarity, Social Development, Equality and the Family, as well as other partners of a national program for cochlear implants targeting more than 800 deaf children from disadvantaged families.