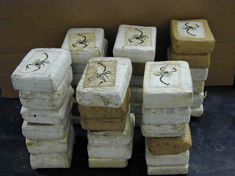 The Polisario gets once again caught for its connection with the drug traffic in the Sahelo-Saharan zone. Some murderous confrontations opposing, Monday 12 September, an armed Polisario group to other groups of traffickers about a loot, evaluated at about one ton of drugs. The confrontations taking place in the desert zone located between the South of Algeria and the North of Mali, have ended with 4 killed persons, according to the AFP.
According to the governor’s counselor of Tombouctou, a city in North of Mali, the AFP specifies that these confrontations opposed a group of drug traffickers from Mali and Niger to an armed group of the Polisario. The confrontations have started following a disagreement about the partition of a ton of drugs.
Three elements from the Polisario are retained as hostages by the Malian and Nigerian traffickers since Saturday evening, according to a Malian source. This is not the first time that Polisario elements are involved in the traffic of drugs in the desert.
These connections have temporarily been put in the shade by the Libyan war, where hundreds of Polisario mercenaries have fought on the side of the fallen colonel. In December 2010, the arrest in Mauritania and Mali of drug traffickers from Polisario ranks, has already confirmed what was known by the Western traffic specialists in the Sahel.

Till today, the arrested chief of the traffickers’ network was a Sahrawi named Soultani Ould Ahmadou Ould Baddi, called Sléitine. The names of the other arrested Polisario Sahrawis were revealed by the Malian and Nigerian security sources. Certain names are known in Tindouf, namely Breika Ould Cheikh and Lahcen Ali Ould Brahim, known under the nickname of Grandayzar. They were members of one of the main traffic network in the Sahelo-Saharian zone. This network has more than that shifts in every country of the region, which were responsible for the transport of cocaine from Latin America to Europe.