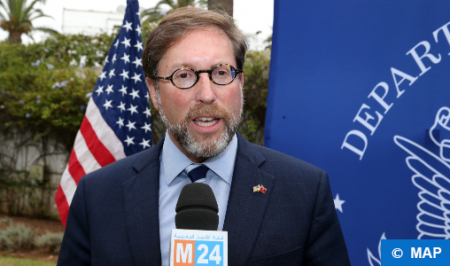 Diplomatic relations between Morocco and the United States of America are strong and deep, said Monday in Casablanca, the chargé d’affaires at the American Embassy in Morocco David Greene. Greene said in a statement to MAP, M24 and Rim Radio, on the occasion of the commemoration of the 15th anniversary of the free trade agreement between Morocco and the United States, that “the Moroccan-American diplomatic and strategic relations are strong and deep, and we are proud of these long-standing relations.” “During this year, we are celebrating the 2nd centenary of the creation of the American Legation in Tangier, an event which is a living example of the depth of bilateral relations,” he added, saying he was convinced that these relations have a bright future. Greene noted that the areas of cooperation between the two countries are multiple and diversified and that there are always new prospects for joint action, noting that within the American Embassy in Rabat and the Consulate General in Casablanca, “we are always working to strengthen bilateral relations.”