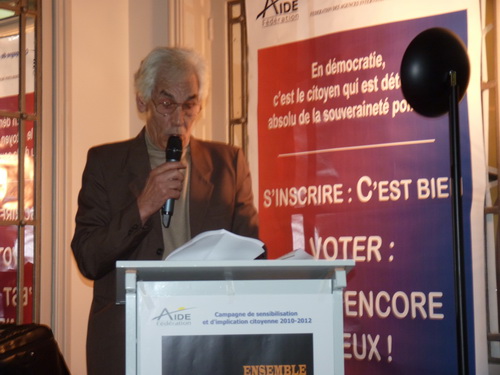 The violation under all its forms, of human rights in Tindouf camps, is again blacklisted at the UN Human Rights Council’s headquarters in Geneva. A systematic black out is imposed by the Polisario military groups, to thousands of Sahrawi refugees illegally sequestrated in Tindouf camps, a sort of Nazi concentration centres. The international agency for Development presided by Abdelkbir El-Hakkaoui, has lately denounced openly this non-right situation. The international NGO has just asked the CDH to intercede with the separatist movement leaders and the authority of the hosting country, Algeria, so as to put an end to the violations and abuses committed daily against the civil vulnerable populations and this, under the knowing and self-satisfied glances of Algerian security services. AIDE invites the UN Human Rights Council to require also that these populations may enjoy their full rights and freedom of expression and particularly of movement so as to be able to join their families in the Moroccan Sahrawi provinces. The population of the Sahrawi refugees sequestrated since more than 36 years in Tindouf camps, is victim of  repeated “terrible violations” of human rights, has observed the Agency delegate, Hamdi Cherifi who spoke in the plenary of the CDH 18th session.

The associative militant has even deplored the fact that this population continues being the exception regarding the respect of basic human rights and the right of refugees. The Sahrawi refugees in Tindouf, has he noticed, are in fact deprived of their right to identification, to movement, to freedom of expression and to the legitimate right to join their families in the Southern provinces of Morocco, their country of origin. Morocco, has recalled the AIDE delegate, has submitted for negotiations the autonomy proposal which may serve as a work frame to finally guarantee to Sahrawi , the full enjoyment of their basic rights and thus to put an end to their sufferings. Cherif has finally, stated the great preoccupation of his association regarding this situation. A situation worsened  by the forbidden access to Tindouf camps, imposed by the Polisario leadership and Algiers authorities to the humanitarian NGOs’ delegations, to journalists and international organizations’ experts wishing to make investigations there about the life conditions of a population entirely isolated from the external world.