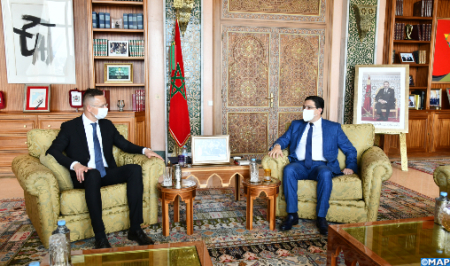 Hungary has always had “clear” and “constructive” positions on the issue of the Moroccan Sahara, which go in the direction of preserving the territorial integrity of the Kingdom, said, Wednesday in Rabat, the Moroccan minister of Foreign Affairs, African Cooperation and Moroccans Abroad, Nasser Bourita. Bourita, who was speaking at a press briefing following talks with the Hungarian Minister of Foreign Affairs and Trade, Péter Szijjártó, who is currently on an official visit to Morocco, thanked Hungary for the various actions it undertakes to consolidate the partnership with the Kingdom. In this regard, he stressed that Hungary has always been an “important partner” of Morocco within the European Union (EU) and has constantly defended the interests of the Kingdom within the Union, as part of a partnership based on mutual respect, reciprocal interests and a precise understanding of the challenges facing the two countries and the member countries of the EU. The visit of the Hungarian top diplomat to Morocco is the result of work and contacts underway during several months, Bourita said, noting that it also constitutes the starting point of a new phase of the strengthening of bilateral relations, through the agreements signed, the projects to be launched and consultations regarding a large number of issues. Bourita praised the “very positive” dynamic and the “very promising” development in all areas of relations between the two countries over the past few years. “There are regular consultations between Morocco and Hungary on several bilateral and regional topics,” he said, noting that during this visit, it was agreed to further strengthen these relations with Hungary to make it a major ally of Morocco within the EU. “This strengthening is part of a strategy sought by HM King Mohammed VI for years,” said Bourita, adding that the said strategy is based on the diversification of the Kingdom’s partnerships outside the European Union so that Morocco, in addition to its traditional partnerships, can open up to new spaces and members of the EU. He also mentioned the upcoming Moroccan-Hungarian Joint Commission which is expected to convene before the end of the year, in addition to the organization of an economic forum between the Moroccan Employers Association (CGEM) and the Hungarian private sector body, with a view to increasing the involvement of the private sectors of the two countries in the development of the bilateral partnership. This will certainly allow the two parties to work together in the economic and investment fields, not only within their own respective markets but also to go together to other markets and regions, particularly in Africa and Central and Eastern Europe, he explained. “As part of a vision that seeks to turn Hungary into the central platform for Morocco to facilitate its access to central and eastern Europe, we have also agreed that the Kingdom will be invited to the next meeting of the Visegrad Group in order to consolidate political and economic relations with this group and diversify partners within the EU”, Bourita said. “We also agreed on strengthening the legal framework, but also the health, human and cultural dimensions, in particular through the signing of an act of mutual recognition of vaccination certificates, which will allow citizens of both countries to benefit of the same advantages offered by the national certificate,” he added. Bourita said that Morocco is counting on Hungary’s current presidency of the Committee of Ministers the Council of Europe to strengthen the relationship between the Kingdom and this body.