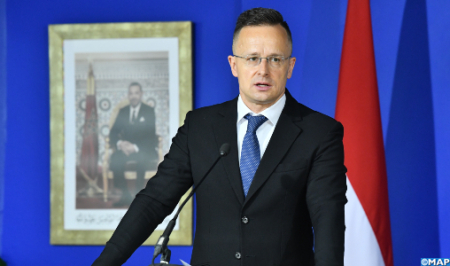 The close friendship and strong alliance between Morocco and Hungary draw their strength from the similarity and homogeneity between the two countries, the Hungarian minister of Foreign Affairs and Trade, Péter Szijjártó, said on Wednesday in Rabat, adding that sovereignty and stability remain, now and in the future, of the utmost importance for both countries. “In several areas, there is a homogeneity between Morocco and Hungary, which has given rise to a close friendship and a strong alliance between the two countries,” said the Hungarian top diplomat at a press conference held at the end of his talks with the Moroccan minister of Foreign Affairs, African Cooperation and Moroccans Abroad, Nasser Bourita, highlighting the centuries-old history as well as the traditions of which the Kingdom and the Republic of Hungary are proud. The Hungarian FM also stressed the need to strengthen cooperation and partnership between Africa and the European Union, in this time of pandemic, which has had health, economic and security repercussions. This partnership, he stressed, cannot be successful if the relationship between the two parties is not based on exchange, mutual respect and equality. In this regard, he underlined that if stability and peace are strengthened in North Africa, this will undoubtedly have a positive impact on security in the European Union. The Hungarian minister expressed his support for Morocco’s candidacy for the UN Security Council, as well as the increase from 100 to 165 in the number of scholarships granted to Moroccan students to pursue their studies at Hungarian universities. He also welcomed the smooth running of the national COVID-19 vaccination campaign in Morocco, “the most successful one in Africa”.