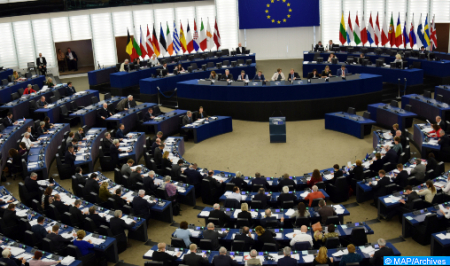 What is a European Parliament resolution worth at the international level? What is the weight of the European Union in resolving political crises across the world? By Adil ZAARI JABIRI. What is a European Parliament resolution worth at the international level? What is the weight of the European Union in resolving political crises across the world? The answer to these questions can be summed up in the famous saying: “Europe is an economic giant, but a political dwarf”. This pitiful status of the community bloc is revealed at each crisis in the face of the diplomatic steamroller of the United States, China, Russia or even Turkey. This is a reality that European diplomacy faces on a daily basis. In the bilateral crisis between Morocco and Spain, some MEPs, alarmed by the Iberian neighbor, driven by their immigrationist and xenophobic motivations, seized the opportunity to attack the Kingdom, the only reliable partner of Europe in the region. They were wrong. Their reckless initiative was not approved with the majority sought and did not gain the support expected under Spanish pressure. In addition to the non-adherence of several MEPs to this text, several of them slammed Spain’s aggressive maneuvers to garner as many votes as possible during the vote. “The Sanchez government by pushing aggressively for the adoption of a European Parliament resolution against Morocco, seeks to camouflage its successive errors, wanting to lead the European Union in this dangerous path”, warned the Czech MEP, Tomáš Zdechovský. The Sanchez government “by pushing aggressively for the adoption of a EP resolution against Morocco” only seeks to hide its successive mistakes, “while involving EU in this dangerous path,” MEP Tomáš Zdechovský wrote on Twitter. “This sterile manœuvre would lead to escalation instead of living a chance to a dialogue between two neighbouring countries,” the Czech MEP underlines, noting that “Madrid is doing everything to destabilise the only stable and peaceful country in the region.” Danish MEP Søren Gade, for his part, said in a statement that he has rejected the text because it does not reflect the reliable and close nature of relations between Morocco and the EU. “I have decided not to vote for the text. I think it’s important to have reliable and close relations between Morocco and the European Union,” he pointed out. Another MEP, Belgian Frédérique Ries, was very clear on this issue. “I have voted against this resolution (…) because it pilloriates our Moroccan strategic partner and remains silent on the responsibilities of the Spanish law enforcement agencies in the violence reported by NGOs and for which the Spanish justice has opened an investigation,” she said. “An effective and pragmatic diplomacy is anything but inflammatory diplomacy,” she explained. This vote shows the way in which those who voted for the resolution judge, conceive and look at the partnership with the southern shore of the Mediterranean. But not the European Union, made up of all the member states which fully appreciate the role Morocco plays in this area and its stabilizing role in the region. During the debate and even in the text of the resolution, MEPs, mostly Spanish, have said what they think. They are at home at the “Temple of Democracy”. Isn’t it ? They criticized Morocco, considered that the borders of Europe begin at Sebta and Mellilia, thus endorsing a colonial fact of another time, but did not forget all the same to recognize the efforts made by the Kingdom in the migration area, in particular the latest announcement of the readmission of unaccompanied minors. The European Parliament “welcomes the approach adopted by the Moroccan authorities on June 1, 2021 to facilitate the return of all identified unaccompanied minors”, the resolution says. No one can deny the place of Morocco and its key role in the Euro-Mediterranean area. This position was also reiterated by the European Commissioner for equality in her statement during the parliamentary debate preceding the vote on this resolution and previously by the spokesperson for the European Union’s diplomacy department, the EEAS, as well as by Oliver Varhelyi, another member of the European executive body. They all welcomed the decision of Morocco reiterated by HM King Mohammed VI to facilitate the return of unaccompanied and duly identified Moroccan minors. They all consider that “Morocco is an important partner for the EU” and express their determination to continue this “close cooperation with Rabat to face common challenges and advance the bilateral partnership, in the mutual interest of the two parties”. These official statements summarize the position, even the constant doctrine of the European Union regarding its relationship with Morocco, which cannot be overused, nor instrumentalized by emotional MEPs in a fleeting resolution or debate. Morocco and the European Union agreed in the Political Declaration adopted at the end of their last Association Council in June 2019 to launch and bring new breath into the “Euro-Moroccan partnership of shared prosperity”. So let’s give chance to the future!