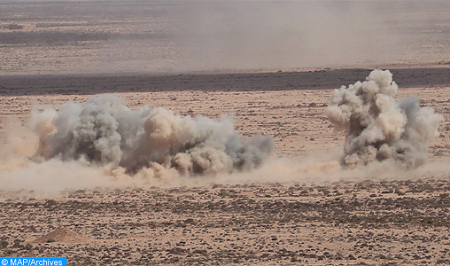 The Moroccan-U.S. combined exercise “African Lion 2021”, which is being held under the high instructions of HM King Mohammed VI, Supreme Commander and Chief of the General Staff of the Royal Armed Forces (FAR), is taking place in “perfect condition”, said Thursday in Agadir Colonel Khalid Harouroud, deputy head of the operations cell of the joint task force coalition. “This exercise will allow FAR to capitalize on the achievements already made and to raise the level of planning and conduct of operations,” Colonel Harouroud told MAP. “The various activities of African Lion 2021 are planned by the Operations Centre in Agadir and conducted by the forces there,” he added, noting that “the current threats of a hybrid nature require the conduct of joint operations with our partners as long as no single country can face this type of threat alone”. For her part, Julia Alvarez, commander in the US army underlined that “we are here to develop partnerships with our Moroccan military counterparts. This has been so far an excellent experience during which we exchanged on several issues and we hope to develop other exercises for the next edition”. For his part, Paul Turner, commander in the British army stressed that “this exercise is extremely important for all the allies working here together. It is extremely important for us to come and partake in these exercises. We are working with our Moroccan colleagues, with our American allies and many other partners.” “This edition has really been a great success. We are here to work with our partners, and beyond the success of this mission, the most important thing is to build links with our allies and our partners”, he added. The 17th combined Moroccan-US exercise “African Lion 2021” will run through June 18, 2021, in the regions of Agadir, Tifnit, Tan-Tan, Mehbes, Tafraout, Ben Guerir and Kenitra, involving thousands of troops from different countries and a very large number of land, air and sea equipment. In addition to the United States of America and the Kingdom of Morocco, this exercise is marked by the participation of Great Britain, Brazil, Canada, Tunisia, Senegal, the Netherlands, Italy as well as the Atlantic Alliance, in addition to military observers from nearly thirty countries representing Africa, Europe and America. The objectives of this exercise, considered among the major combined exercises in the world, are numerous: to strengthen the maneuver capabilities of the participating units; consolidate interoperability between participants in the planning and conduct of joint operations in a coalition framework; perfecting tactics, techniques and procedures; develop cyber defense skills, train the air component in the conduct of hunting, support and air refueling operations; consolidate cooperation in the area of maritime security; conduct exercises at sea in the field of naval tactics and conventional warfare and carry out humanitarian activities, the source points out. It includes, in addition to training and simulations in command activities and training on operations to combat violent terrorist organizations, land, airborne, air, maritime and Nuclear, Radiological, Biological and Chemical decontamination exercises. As part of parallel humanitarian activities, a field medico-surgical hospital will be deployed at Amlen (Tafraout) where medical and surgical services will be provided for the local populations of the region by medical teams made up of doctors and nurses from the FAR and the US Army.