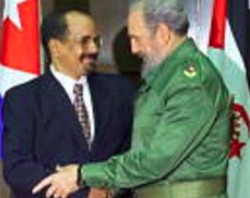 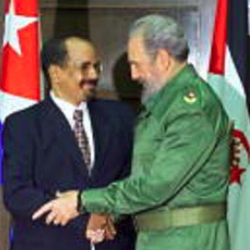 The Polisario bloodthirsty people have just registered a new odious crime in their honors list already full. The Sahrawi opponent Khalifa Oueld Mohammed El Ouali Oueld Maâ El Aynaine has been coldly assassinated by the torturers of the separatist movement making the law in Tindouf camps on the Algerian territory. According to the Forum supporting the people in favour of autonomy in TIndouf (FORSATIN) citing some security sources in Tindouf, a new horrible crime was committed by the Polisairo criminals against a man who has always opposed the thesis of the separatists of the mercenaries band acting under the orders of the Algerian generals and at the service of causes that are diametrically opposed to the interests and hopes of the Sahrawi populations sequestrated against their will in Tindouf camps.
Before dying, Khalifa Oueld Mohammed El Ouali had started a campaign to increase public awareness of the Sahrawi families, to require from the leaders of the movement for independence, their part of international humanitarian aids. The Sahrawi opponent was coldly assassinated as a punishment for these actions and for having revealed to the large public what is behind the food intoxication, of which have been recently victims many inhabitants of Tindouf camps, among whom small children.

As usual, to clear themselves and to get their hands clean of this cowardly assassination, the silent partners members of the Polisario leadership have chosen two scapegoats among the opponents of the separatist movement to make them responsible of Khalifa Oueld Mohammed El Ouali’s death.
While condemning this odious crime, the Forum supporting the people in favour of autonomy specifies that the inclination and conspiracies of the Polisario leaders can no more pass unnoticed, the Sahrawi populations of Tindouf and particularly its bright youth, are fully conscious of this disgraceful acts and try with the means at their disposal to fulfil this dream of change they are cherishing especially since the beginning of the Arab Spring.