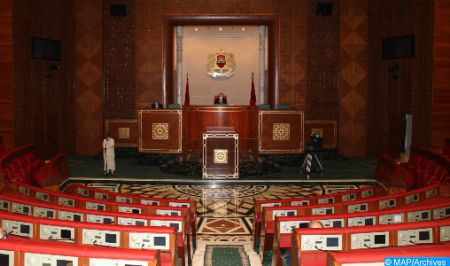 The bureau of the House of Advisors praised, Monday, the various positions supporting Morocco following the adoption by the European Parliament (EP) of a resolution contrary to the spirit and philosophy of the strategic partnership uniting the Kingdom and the European Union (EU). The Bureau of the House of Advisors welcomes the various positions supporting the Kingdom of Morocco, expressed by regional coalitions and continental and regional parliamentary unions, as well as friendly and brotherly parliaments, said the Bureau in a statement at the end of a meeting held by video conference under the chairmanship of the speaker of the House, Hakim Benchamach. The bureau lauded, in this context, the positions of the Arab Parliament, the Arab and Pan-African Parliamentary Union, the League of Arab States, the General Secretariats of the Organization of Islamic Cooperation and the Gulf Cooperation Council, the Bahraini Consultative Council and the House of Representatives of Yemen, in addition to the statements of solidarity issued by the president of the France-Morocco Friendship Group in the Senate as well as by members of the EP, according to the same source. In addition, the bureau of the House of Advisors decided to take part in the proceedings of the next session of the Arab Parliament, scheduled from 22 to 28 June in Cairo, the statement added, noting that the Arab Legislative Institution will hold on June 26, as part of its solidarity with Morocco, an urgent session devoted to the examination of the EP resolution. In addition, with regard to the control of government action, the bureau approved the agenda of the oral question session scheduled for Tuesday, the statement said. In terms of legislation, it was decided to hold, immediately after the oral question session, a plenary session devoted to the examination and voting of draft legislative texts that are ready, added the same source, noting that it was decided to submit to the Standing Committees six legislative texts from the first house for consideration as soon as possible. The bureau also took note of the tabling by the Committee on Education and Cultural and Social Affairs of the report on its temporary exploratory mission on the health situation in the region of Fez-Meknes, conducted from 10 to 15 November and from 6 to 12 December 2020, the statement said, adding that the said report will be considered at a plenary session, after complying with all the provisions stipulated in Article 130 of the Rules of Procedure of the House. Finally, the bureau agreed in principle to the organization by the Committee on productive sectors of a temporary exploratory mission on a set of hotel and tourism training institutions, the statement concluded.