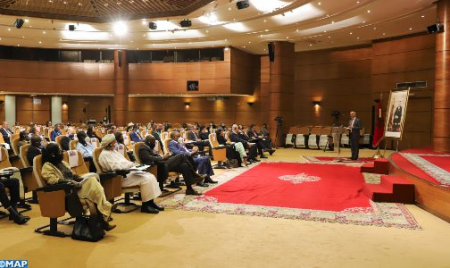 The president of the ad-hoc Committee on the Development Model (CSMD) Chakib Benmoussa, presented on Tuesday in Rabat, the general report on the new development model (NMD) to ambassadors and members of the diplomatic corps accredited to Morocco. During this meeting, Benmoussa reviewed “the approach used for the development of this model,” a result of a “reflection initiated in 2017 by HM the King, where he called on all of the country’s living forces to contribute to it.” “Since its establishment by the Sovereign in 2019, the said committee has expanded the scope of consultation from a frank and clear assessment on the achievements, shortcomings to the way of setting the course for a Morocco of tomorrow,” he said. The views resulting from these consultations have converged towards the recognition of the country’s multiple achievements and capacities while their expectations included the creation of more value-added by the national economy, Benmoussa noted. In this regard, the president of the committee highlighted the strategic directions of transformation outlined in the general report, namely productive economy, diversifying and creating value and quality jobs, opportunities for inclusion for all. The private sector is set as a real driver of transformation that will be able to contribute effectively to the success of the new development course, he said. Benmoussa also highlighted the mechanisms proposed to implement this development model including a National Pact for Development.