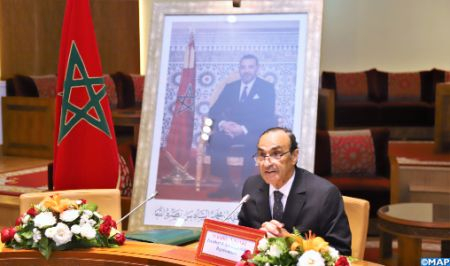 A united Maghreb means a stronger Mediterranean and more prosperity for the peoples of the region, stressed, Wednesday in Rabat, speaker of the House of Representatives, Habib El Malki. El Malki was speaking during a videoconference meeting of the Bureau of the Parliamentary Assembly of the Union for the Mediterranean (UfM). “We must trust the United Nations to find a fair, lasting and mutually acceptable solution to the artificial territorial dispute between Morocco and Algeria since the Cold War,” said El Malki, noting that this will make it possible to complete the construction of a united Maghreb, which will give rise to a stronger Mediterranean and more prosperity for the peoples of the region, which currently loses more than 2% in terms of GDP. As Mediterranean parliamentarians, he added, “we must promote among the countries of the UfM and elsewhere, the virtues of co-development and development in solidarity, if we want that one day this cradle of civilizations that represents the Mediterranean basin regains its former glory and ceases to be a liquid graveyard that swallows the dreams of so many souls in distress. In this sense, El Malki said that in the Moroccan-African framework, the South-South cooperation and solidarity development “work very well”, adding that there is no reason why it should not work in a trans-Mediterranean framework. He said that in the southern Mediterranean, Morocco could be the locomotive of a renewed Euro-Mediterranean partnership based on peace, security, human dignity and sustainable development.