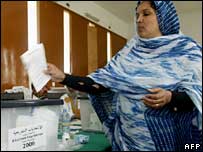 While the electoral campaign is in full swing throughout the Kingdom, in the Moroccan provinces of the South which are part of the rest, this poll has a double political and patriotic significance. The inhabitants of these provinces show through their massive participation, like in all the last legislative elections of 2007 and local elections of 2009, their belief without reserve in their future within their homeland and fully assume their patriotic duty as citizens and voters. Through these elections, the inhabitants of these provinces show also that they are determined to contribute to the management and development of their provinces and the whole country. In the legislative elections of 2007, the rate of participation in the Moroccan Southern provinces was the highest in comparison with the other regions of the Kingdom.

This year, and to just give the example of the Smara district, half of the population estimated at 50 000 inhabitants, that is 25 000 have been registered on the electoral lists.
This data supported with figures unveil the Polisario propaganda which, each time elections in Morocco are concerned, tries in vain to prove to the international community that the inhabitants of the Southern provinces are obliged by the local authorities to get registered and to vote to accomplish their national duty. But the reality is different, because in these provinces, the electoral process is going on normally just like in the rest of the country, and maybe even with further enthusiasm, with the only difference that this part of the Kingdom, the belonging to the tribes is important in the choice of candidates. So, it is rather in Tindouf camps that we should check if the Sahrawi refugees have really the right to express themselves freely not to mention their inexistent right to elect those that are supposed to lead them. The latter are, it seems, nominated for life as it is the case of the uncontested sempiternel Polisario chief, Mohamed Abdelaziz who is leading alone the movement bodies since decades.