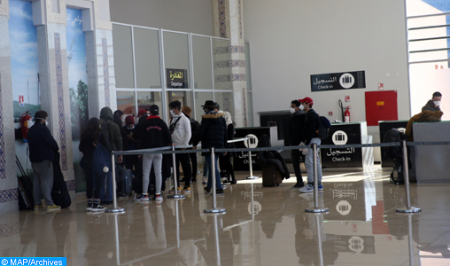 Like their fellow citizens around the world, Moroccans living in Switzerland have welcomed the initiative of HM King Mohammed VI facilitating the return of Moroccans living abroad to the country, deeming this Royal gesture as a new mark of the high royal solicitude towards the Moroccan community abroad. By its timing, its dimensions and its social and economic significations, this royal initiative which aroused feelings of gratitude, relief and satisfaction among Moroccans living abroad embodies the particular attention that the Sovereign pays to the expectations and the concerns of the community living abroad, and illustrates the desire of HM the King to personally ensure the well-being of this community, underlined several civil society actors in Switzerland in statements to MAP. For the president of the Association of executives of Moroccan origin in Switzerland (ACOMS), Hicham Guessous, the High Royal Instructions for the facilitation of the return of Moroccans living abroad to the country at affordable prices, intervene without a doubt at the right time, given the repercussions of the health crisis on economies and people. “As the summer holidays approach, this decision, which is as exceptional as it is pleasing, is a good surprise for the community living abroad who can plan holidays in their country of origin under reasonable conditions. This is a very valuable initiative given the still complicated global economic and social context,” said Guessous. In the same regard, the president of the Association of Moroccans Living in Switzerland (AMRS), Omar Benkacem, expressed the deep gratitude of Moroccans around the world for this initiative which comes at the right time, highlighting the High Solicitude of which HM the King never ceases to surround the Moroccans living abroad and which has always led to a series of initiatives aimed at supporting this community. For their part, the president of the Moroccan Sahara association in Switzerland, AbdelKader Iknou, and the president of the Moroccan League in Switzerland, Amouch Khadija, commended the noble royal gesture that left positive echoes among the members of the community abroad. This decision, which enables Moroccans around the world to reunite with their families and loved ones, will strengthen ties between the community and the Kingdom and demonstrates HM the King’s permanent concern to always respond to the concerns and expectations of all citizens, they stressed. This decision thus testifies to the solid symbiosis and the perfect communion between the Throne and the people, they said, while expressing the unwavering attachment of the Moroccans living abroad to the Kingdom and to the constants of the Nation. His Majesty the King has kindly given His very high instructions to the competent authorities and to all stakeholders in the field of transport, in order to work towards facilitating their return to the country at affordable prices. The Sovereign has ordered all stakeholders in the field of air transport, in particular the company Royal Air Maroc, as well as the various actors of maritime transport, to ensure reasonable prices that are within everyone’s reach, as well as to ensure a sufficient number of rotations, in order to allow Moroccan families abroad to return back home and meet their families and loved ones, especially in the context of the Covid-19 pandemic. His Majesty the King has urged all tourism operators, both in the field of transport and the hotel industry, to take the necessary measures to welcome the members of the Moroccan community living abroad in the best conditions and at the best prices.