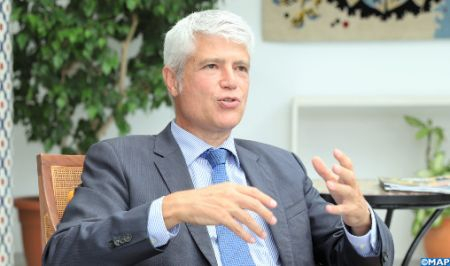 Switzerland and Morocco are called upon to envision the future together for Africa by taking advantage of the Kingdom’s position as a platform towards the continent, said the Swiss ambassador in Rabat, Guillaume Scheurer. “The next chapter that we must write together is to try to envision the future together for the African continent by taking advantage of Morocco as a platform,” he told MAP TV channel “M24″on the occasion of the centenary of the Swiss diplomatic presence in the Kingdom. Africa, he said, “is the continent of the future and there is a wide acceptance that Morocco is an extraordinary gateway because of its geographical and geostrategic position, but also because of its thousand-year-old history and its ancestral cultural and religious relations with many African countries”. On the economic front, the diplomat noted that Moroccan companies are “very present in Africa,” particularly in the financial, construction and tourism sectors. Affirming that there is a potential for growth and extraordinary development to be developed at the economic and commercial levels, the diplomat emphasized the “very good” presence of Swiss companies, with about 60 entities active in Morocco. These companies ensure above all a transfer of know-how and establish a training system on site, as they guarantee a little more than 10,000 jobs with high added value, said Scheurer. The ambassador also welcomed the excellent level of relations between Bern and Rabat, noting that over the past hundred years “we have witnessed varied relations, rich and based on mutual respect. “As a reflection of our relations, we have a solid political framework, dense and based on trust” as evidenced by the visits of senior Swiss officials in the Kingdom, he said. The Swiss ambassador said that the work done by the Ad-hoc Committee on the development model (CSMD) was followed with attention in Bern and “we could see an affinity of conclusions”. Regarding bilateral trade, the diplomat recalled that in 2019, the two countries have exceeded for the first time the mark of 600 million euros in trade, stating that Morocco is the third trading partner of the Swiss Confederation in Africa.