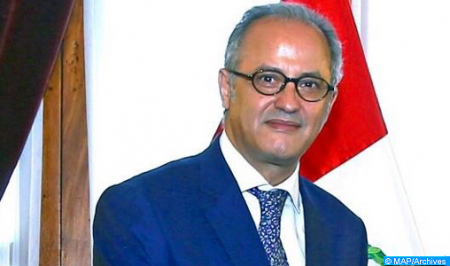 Morocco’s ambassador to Italy Youssef Balla, recently held talks in Trieste, northeastern Italy, with the president of the Friuli-Venezia Giulia autonomous region Massimiliano Fedriga, on ways to strengthen decentralized cooperation. On this occasion, the ambassador highlighted the pioneering experience in the Maghreb and Arab region of the Moroccan model of extensive regionalization. He stressed that the autonomy initiative of the Moroccan Sahara, which the UN Security Council described as “serious and credible”, represents the only solution to this regional dispute. The Italian official expressed his keenness “to share with Morocco, the long experience of his region in decentralized management and self-government”. Fedriga highlighted in this sense the political stability enjoyed by the Kingdom, which represents a major asset for North Africa and Europe. The president of the Italian region stressed that the European Union should support Morocco, adding that the Kingdom is a democratic model to follow for several countries in the region. He also stressed the role of the Moroccan religious model based on moderation, coexistence, peace, and tolerance.