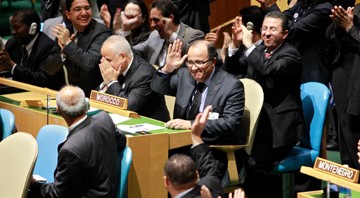 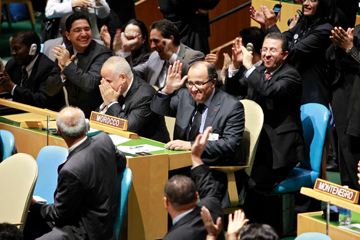 Morocco is now a non-permanent member of the UN Security Council. Elected on 21st October 2011, at the first tour and with an overwhelming majority (151 votes while the required are only 129) for a two-years mandate, Morocco occupies officially since January the 1st , its seat on the side of the five permanent member countries and nine other non-permanent members of the Security Council. The Moroccan delegation has certainly too much to do especially when it concerns defending the Moroccan Sahara file, which sovereignty is contested by the Polisario Front enjoying an unconditional support from the Algerian neighbour and with a minor degree from other Latino-American countries like Cuba and African ones like South Africa. This country which itself occupies a non-permanent seat in the Security Council, has always given trouble to Morocco, whenever the debate concerns the future of the Southern provinces.

It is well known that Pretoria more than Algeria, has blindly chosen to be on the side of the Polisario separatists and supports their thesis without discrimination. Given the presence of the Council of this unconditioned ally of the Polisario Front, the admission of Morocco will certainly restore the balance between the powers within the UN executive body. Thus, waiting for the holding, under the auspices of the UN, of the 9th round of informal negotiations with the opposing party, the Moroccan diplomats in New-York, are from now on, called to increase their contacts and lobbying to glean a large international adhesion to the Moroccan autonomy plan to adopt it as a peaceful solution to the old Western Sahara conflict. It is thus already clear that for the Sherifian Kingdom’s representatives at the United Nations the new mandate is no bed of roses. On the opposite, it is high time for them to roll up one’s sleeves and to make the diplomacy move behind the scene so as to boost the process of the final settlement of this Sahara thorny issue, knowing that Morocco has two precious voices to support it, those of France and the USA, both of them, permanent members in the Security Council. Elected for its third mandate at the Security Council after the mandate of 1963-64 and 1992-93, Morocco will have the responsibility like the other new non-permanent members : Togo, Guatemala, Pakistan and Azerbaijan, “to maintain international peace and security”,  as stipulated by the United Nations Charter. It is for this reason that Morocco is questioned not only for the territorial conflict opposing it to the Polisario supported by Algeria, but also for the security in all the Sub-Saharan band and the Sahel at the Southern frontiers and for the acknowledgment of the Palestinian State and the situation in the countries confronted to the popular revolts in the wake of the Arab Spring.