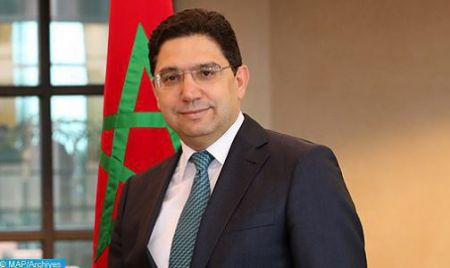 Morocco appreciates the “clear and constant” position of Liberia regarding the Moroccan Sahara issue, said, Thursday in Rabat, minister of Foreign Affairs, African Cooperation and Moroccans Abroad, Nasser Bourita. Liberia, which withdrew its recognition of the pseudo SADR in 1999, has since expressed strong support for the territorial integrity of Morocco and its national sovereignty, Bourita said in a statement to the press after talks with Liberian Foreign Minister Dee-Maxwell Saah Kemayah Sr. The minister also recalled that Liberia was among the first countries to open a consulate in Dakhla and to consistently express its support for the Moroccanness of the Sahara. Bourita said that the meeting with his Liberian counterpart was an opportunity to highlight the strong dynamics of bilateral relations under the leadership of both Heads of State. The meeting allowed to agree to concretize the ambition carried by the two Heads of State to promote these relations through the roadmap signed on Thursday and which contains a series of actions on several sectors. The two sides also agreed to hold the next session of the joint Commission early next year to, among other things, review the achievements since the last session in 2019 and set priorities under this roadmap. The two parties discussed some regional and international issues, he said, noting that Morocco has always reaffirmed the importance of the Mano River initiative to stabilize this region and contribute to its socio-economic development, in accordance with the vision of His Majesty King Mohammed VI. Morocco also coordinates with Liberia on issues related to the sub-regional organization of the Economic Community of West African States (ECOWAS) to contribute to the stability of this region and the promotion of a model of cooperation between the Kingdom and the countries in this region, he concluded.