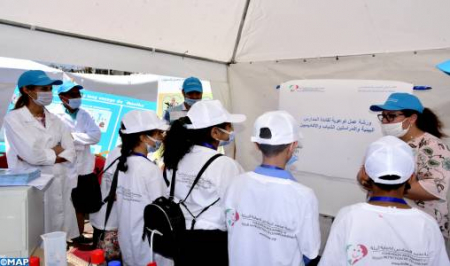 The Mohammed VI Foundation for the Protection of the Environment, chaired by Her Royal Highness Princess Lalla Hasnaa, launched on Saturday at the Bouregreg Marina, a new edition of the campaign #b7arblaplastic for the protection of marine environments. The campaign, which takes place within the framework of the 22nd season of Clean Beaches of the Foundation, aims to raise awareness among young people on the need to protect the seas and oceans against the discharge of plastic waste and has set itself the task of mobilizing more than one million young people over the summer period, to undertake 10,000 awareness-raising and education actions on sustainable development among youth and to recover 10 tons of plastic per beach during the summer period. This action conducted jointly by the Foundation, the ministry of National Education, Vocational Training, Higher Education and Scientific Research and the National Office of Electricity and Drinking Water (ONEE), will concern the 105 beaches of the Foundation’s Clean Beaches program and will involve diving associations that will sensitize young people of the Eco-Schools, Young Reporters for the Environment and Green Universities Network programs to the risks posed by plastic waste in the seabed. In a statement to the press, the head of educational activities at the Foundation, Mouna Belbekri, said that the latter continues its mobilization for the preservation of marine environments against pollution and for the safeguarding of beaches, coastline, seas and oceans, adding that young participants in the programs Eco-Schools, Young Reporters for the Environment and the Network of Green Universities will benefit from several thematic workshops.