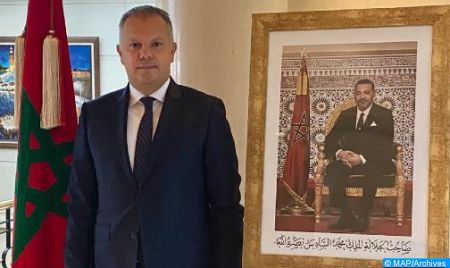 The autonomy initiative presented by Morocco is the only solution that can put an end to the artificial conflict over the Moroccan Sahara, created by an Algerian regime trapped in its own expansionist ideology and geopolitical designs, said Moroccan ambassador to Peru, Amin Chaoudri. The diplomat, who was speaking at the “1st International Conference of the Bicentenary of the Independence of Peru”, said that “the autonomy initiative, which has the fullest support of the population of southern Morocco as well as the support the international community, is the only serious and credible solution to end this regional conflict, within the framework of sovereignty and territorial integrity of the Kingdom”. The UN Security Council, he added, considers that the resolution of this problem must be political, realistic and practical, which is embodied by the Moroccan initiative. The ambassador recalled, in this regard, the historic decision of the United States to recognize the full sovereignty of Morocco over its Sahara, noting that Washington’s position enshrines the realistic and fair policy of Morocco based on the autonomy plan under Moroccan sovereignty, and in accordance with the vision of HM King Mohammed VI, concerned with the development of the southern provinces, through mobilizing huge investments to ensure a better future for all citizens. The Moroccan diplomat also recalled, during this video conference organized by the “Commission for the Bicentennial of the Independence of Peru” in Congress, the opening by several countries of diplomatic representations in the cities of Laayoune and Dakhla, calling not to be deceived by the maneuvers of the Algerian regime and its puppet the polisario. “The referendum is not a principle, but rather a tool that the Security Council has excluded from the terminology of its resolutions for the twentieth consecutive year and its 34 resolutions since 2001,” he underlined, noting that the most affected victim by this conflict is the population held against its will in the Tindouf camps, southern Algeria, to whom the Algerian regime refuses even a census by the United Nations.