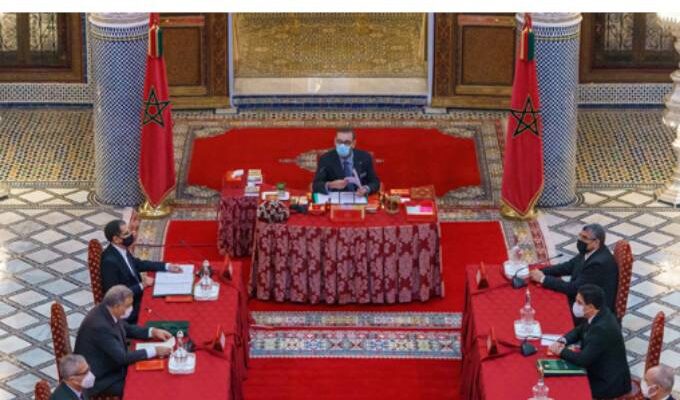 His Majesty King Mohammed VI on Monday chaired, at the Royal Palace in Fez, a Council of Ministers, which was dedicated to the adoption of two projects of framework laws, a draft law and several draft decrees and international conventions, says a statement by the spokesperson of the Royal Palace.

At the start of the Council, the Minister of Economy, Finance and Administration Reform presented to His Majesty the King the draft framework law on tax reform.

Prepared in application of the high Royal guidelines and on the basis of the recommendations of the National Tax Conference held in May 2019, this project aims to establish an efficient, fair, equitable and balanced tax system, which makes it possible to mobilize all tax potentials for finance public policies, promote economic development and achieve social inclusion and cohesion.

The project is intended to set out the basic principles and objectives of this reform, which mainly relate to:

First: The strengthening of fundamental rights through a tax system based on respect for the equality of all before taxes, tax fairness, the right to information and the guarantee of the rights of the taxpayer and those of the administration;

Second: The protection of the taxpayer against any abusive interpretation of legal texts by the tax administration, the strengthening of the relationship of trust between this administration and the taxpayer, the guarantee of the right of recourse for both parties and of the independence of the competent tax authorities, in addition to the creation of a National Tax Observatory;

Third: The establishment of a tax system in the service of competitiveness, innovation and job creation and the mobilization of the full tax potential to ensure better financing of public policies;

Fourth: The orientation of the tax system towards strengthening solidarity, particularly for the financing of social safety nets, such as medical coverage, family allowances, as well as for the reduction of social inequalities.

It also aims to reform the taxation of local authorities in order to ensure them permanent resources, in line with the State’s determination to review and simplify the rules relating to these taxes and their harmonization with the provisions governing state taxes.

Afterwards, the Minister of Economy, Finance and Administration Reform presented to His Majesty the King the outlines of the framework bill relating to the reform of public establishments and enterprises (EPP).

Developed in accordance with the High Royal Guidelines contained in the Speeches of the Throne and the Opening of Parliament for the year 2020, this project aims to put in place the principles and objectives framing the comprehensive and progressive reform of public sector establishments, in particular through:

– The establishment of a restructuring program of EPPs by their regrouping or merger or by their dissolution and liquidation, supervision of the operation to create new public establishments and enterprises and their participation in the capital of private enterprises;

– Giving impetus for a new dynamic in the public sector, the increase in the efficiency of the financial control of the State, the establishment of mechanisms guaranteeing cohesion, coordination and complementarity between the various public establishments and enterprises ;

– The adoption of a contractual approach between the State and these establishments and companies in order to increase their performance and improve their governance;

– The transformation of public establishments which carry out a commercial activity into a limited company.

This draft framework law will set out the legal framework for the creation of the National Agency for the Strategic Management of State Investments and for monitoring the performance of public establishments and enterprises.

The Council also approved a draft law amending and supplementing the law on the prohibition of the development, production, stockpiling and use of chemical weapons and on their destruction, which was adopted within the framework of the Kingdom’s ratification of the International Convention on this subject.

This project aims to update Table 1 annexed to the said law through the addition of a series of chemicals, which were added on the occasion of the Hague Conference, held in November 2019, as well as the revision tables annexed to this Convention, by virtue of an organic text given their renewed appearance.

Within the framework of the Very High solicitude of His Majesty the King towards the right holders of the martyrs of the Nation, the disabled during military operations and the repatriates and military servicemen, the Sovereign has given His approval to a draft decree exempting this category from Land Conservation rights and charging the National Agency for Land Conservation, Cadastre and Cartography for paying the costs of establishing the technical files carried out on their behalf.

Regarding the military domain, His Majesty the King, Supreme Commander and Chief of General Staff of the Royal Armed Forces, has given His approval for two draft decrees relating respectively to the application of the law relating to materials and equipment defense and security, arms and ammunition, and cybersecurity.

The first project sets out the measures allowing the exercise of manufacturing activities of materials and equipment related to this field, as well as the related import, export and transport operations.

As for the second project, it sets out the applicable rules for the security of information systems specific to State administrations, local authorities, public establishments and enterprises as well as to basic infrastructure of a vital nature and to private providers.

As part of Morocco’s respect for its international commitments and its efforts to strengthen cooperation and partnership with a group of brotherly and friendly countries, the Council of Ministers approved 11 international conventions, including three bilateral conventions and eight multilateral agreements.

At the African level, these conventions relate to the protection, management and development of the marine environment and coastal areas, the African Union convention on cybersecurity, the protection of personal data, as well as the African Youth Charter which aims to promote the situation of young people, reduce income disparities and develop education systems.

At the Arab-Islamic level, the Council adopted conventions relating to the liberalization of trade in services between the Arab countries and the statute of the Islamic Organization for Food Security, which aims to mobilize financial and agricultural resources in order to ensure food security.

At the end of the work of the Council and in accordance with the provisions of Article 49 of the Constitution and following the proposal of the Head of Government, and at the initiative of the Minister of the Economy, Finance and Administration Reform, His Majesty the King has appointed Mr. Hicham Zenati Serghini Director General of the National Society of Guarantees and Company financing;

and at the initiative of the Minister of Industry, Trade and Green and Digital Economy, His Majesty the King has appointed Mr. Youssef El Bari Director General of the Moroccan Agency for the Development of Investments and Exports;

and at the initiative of the Minister of Culture, Youth and Sports, His Majesty the King has appointed Mr. Mohamed Kenbib Director of the Royal Institute for Research on the History of Morocco.