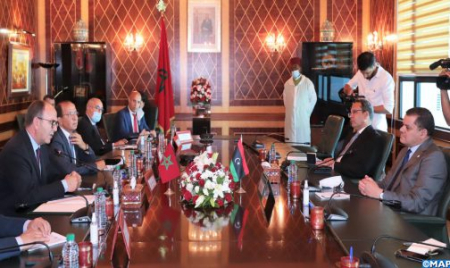 The Speaker of the House of advisers (upper house), Hakim Benchamach, reiterated, Monday in Rabat, the paramount importance given by Morocco to strengthening its relations with Libya. During talks with the head of the government of national unity in Libya, Abdelhamid Dbeibah, the House Speaker reaffirmed the unwavering position of the Kingdom of Morocco and the paramount importance it attaches to strengthening bilateral relations with Libya in various fields, given the fraternal, solidarity and human ties binding the Libyan and Moroccan peoples. According to a statement from the House of Advisors, Benchamach focused on the crucial stage that the brotherly Libyan state is going through, noting the strong commitment of Morocco under the leadership of HM King Mohammed VI to accompany Libya in all its steps towards the consolidation of peace and stability. He also underlined the need to put an end to division and the political blockage and to strengthen the unity and sovereignty of the country. The Speaker expressed the wish that the forthcoming Libyan elections will be a success with a view to forming a strong and unified executive power that will put an end to the transition period and ensure permanent security and stability to Libya. In this regard, he underlined Morocco’s attachment to its vision in resolving the Libyan crisis, which consists in enabling the Libyans to resolve their problems by themselves, far from any interference. He also voiced the Kingdom’s readiness to bring together the appropriate conditions for the success of the Libyan dialogue, as it was the case for the sessions held in Bouznika and Tangier which contributed to the consolidation of the reconciliation process and the unification of points of view and positions between the Libyan brothers. For his part, Mr. Dbeibah expressed his thanks and esteem for the unwavering support provided by Morocco to Libya with the aim of strengthening its stability and unification of institutions thanks to the personal commitment of HM King Mohammed VI and all the components of the Moroccan people. He stressed that the government of national unity is fully prepared to work together with Morocco to consolidate the ties between the two countries to serve the interests of the two brotherly peoples. This meeting was an opportunity for the Libyan official to welcome bilateral relations between the two countries and to examine the means of enhancing and diversifying them to cover different areas, in particular the development of trade, industrial and agricultural exchanges and the consolidation of cooperation in the sector of renewable energies, expressing his willingness to take advantage of Moroccan experience and know-how, the statement says. On this occasion, Mr. Dbeibah called for the activation of the Morocco-Libya joint commission. The visit of the Libyan official is part of the strengthening of bilateral relations between the two brotherly countries on the basis of continuous dialogue and political consultation and the exchange of views on the major issues of common interest.