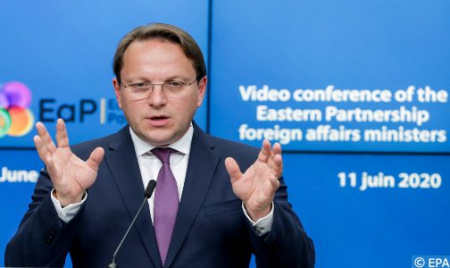 Morocco has become a key partner in the various stages which have led to the renewal of the European Union’s (EU) agenda in the Mediterranean, underlined on Monday the European Commissioner for Neighborhood and Enlargement, Oliver Varhelyi. In an address on the occasion of the official launching ceremony of the Green Partnership between Morocco and the EU, the European official said that this new milestone “is proof of the common will of Morocco and the European Union to strengthen their strategic relationship through joint work on the energy and economic transition towards a clean and low-carbon model, on the sustainable management of waste and water and the increase in adaptation capacities and climate resilience”. After recalling that the southern neighborhood is one of the most affected regions in the world by climate change and environmental degradation, he stressed that “the Mediterranean region is home to some of the best solar and wind resources in the world, offering unparalleled opportunities for cooperation in clean energy, including for the production of green hydrogen, which is a new strategic priority”. “The moment we are in is particularly auspicious. The health crisis offers us the opportunity to revive our economies on a new model. The European Union and Morocco can jointly engage in an economic recovery,” said the European Commissioner. He added that “the Morocco-EU Green Partnership offers us the ideal framework to address strategic issues related to economic recovery. It places sustainability at the center of policies, thereby contributing to the development of a more diversified and competitive Moroccan economy, generating inclusive growth and future-oriented.” Varhelyi affirmed that “our strong ambitions are therefore up to our privileged partnership and consequently, we will give ourselves the means, including in terms of financial cooperation, to translate our compromises into concrete policies and actions”. He explained that “the economic and investment plan for the southern neighborhood will be the backbone of our action. It is the product of redesigning our approach and will help stimulate a long-term sustainable and inclusive social and economic recovery.” The Plan includes 12 concrete flagship initiatives in priority sectors to support competitiveness and growth, he said, noting that “Morocco is at the heart of this Plan with no less than 7 flagship initiatives specific to the Kingdom.” These initiatives recognize the fundamental support of the EU, for example, to the reform of higher education or to the contribution to the post-COVID economic recovery plan of Morocco by promoting investments financed under the Strategic Fund of investment created by HM King Mohammed VI. These flagship initiatives, he added, also touch on “support for digitization, in general, in Morocco, and for the very large social protection reform project”. One of these flagship initiatives is also focused on the implementation of the Morocco-EU Green Partnership and will be accompanied by a strategic engagement with the European Financial Institutions and the private sector, which are essential partners to support the investments of the Partnership, he pointed out. This type of partnership is actually the first of its kind that the European Union is developing with a third country and, a fortiori, with a country from the southern neighborhood, said the European Commissioner, recalling that “this commitment with our Moroccan partners is not something new”. He said in this regard that since 2010, EU-Morocco cooperation in green sectors has amounted to around 700 million euros, while funding for the energy transition has reached 320 million euros. “Since 2016, we have been carrying out an ambitious program of 105 million Euros in support of competitiveness and green growth in Morocco for which a final payment of 12 million Euros will be finalized in the coming weeks,” he added. In addition, recalled the European Commissioner, an agreement for the revival of Moroccan Rural Territories through employment and entrepreneurship in the agricultural sector for an amount of 20 million euros has just been signed by the European Commission and will contribute the emergence of a rural middle class focused on green growth.