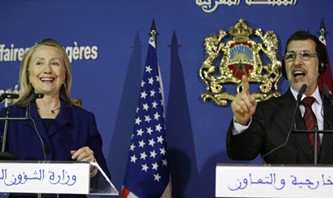 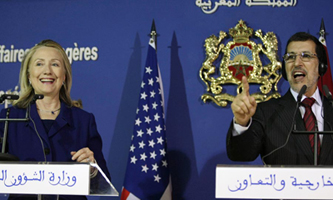 There is no solution to the Western Sahara conflict but a “mutually acceptable” solution. This is the conviction expressed on last Sunday in Rabat, by the American State Secretary, Hillary Clinton. During a press conference held jointly with her Moroccan counterpart Saad Eddine Othmani. Hillary Clinton, who had just ended an official visit to Morocco, the last stopping country of her tour in the Maghreb, has declared that the United States continued “supporting the efforts aiming at finding a peaceful, sustainable and mutually acceptable solution to the conflict” of the Western Sahara. The Chief of the American diplomacy has gone straightforward to the aim, stating that the “position of the USA” about this conflict “remains unchanged”. Washington, she assured, continues supporting the UN’s efforts to find a political solution mutually acceptable, a position which would certainly not please the Polisario mercenaries and their Algerian mentors. Especially, when Hillary Clinton, has reaffirmed that the Moroccan autonomy plan for the Sahara, under the Moroccan sovereignty, constitutes a “serious, credible and realist proposition”. This solution, she has supported, is of a nature to allow the Sahrawis to manage their affairs themselves.

The next round of informal negotiations on the Western Sahara, under the UN aegis, would take place from the coming 11 to 13th March in Manhasset, in the suburbs of New York.
The American Secretary of State did not lose the occasion to plead for a rapprochement between Morocco and Algeria, calling for more cooperation between the two neighbours, particularly in the security field”.
She has expressed the wish to see the land frontiers between Morocco and Algeria reopened so as to encourage the bilateral cooperation in the economic and security fields.
“Morocco and Algeria are themselves facing threats from the South”, has warned Hillary Clinton, who was on Sunday the guest of the Second TV Channel (2M) programme “Special guest”.
This issue, she specified, was evoked with insistence whether with the Algerian executives or their Moroccan homologues, because it constitutes, according to her, « the best way to transcend the divergences”.