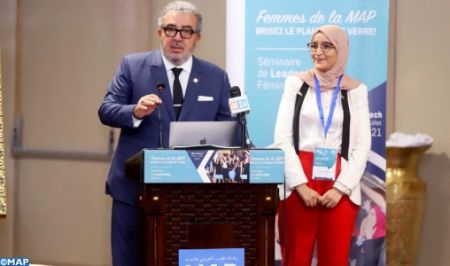 The 3rd edition of the seminar “Women Leadership” of the Moroccan News Agency (MAP), a major event within the framework of sustained efforts by the Agency to strengthen and promote parity and give the chance to women to access positions of responsibility, opened Monday in Marrakech, in the presence of MAP Director General, Khalil Hachimi Idrissi. Benefiting the Agency’s female staff, this seminar, which runs until July 2, will consist of several rotating workshops and team building activities, led by a team of professional coaches. Held under the theme “Women of MAP: Break the glass ceiling!”, this event is also a concrete achievement of the program “MAP- Parity” launched by the General Management of the Agency, with a view to improving women’s leadership, thus enshrining the culture of parity. Speaking at the opening of this seminar, Hachimi Idrissi, highlighted the relevance and uniqueness of this seminar which serves as an opportunity to focus on all the time since the establishment of a Committee of parity within MAP whose mission is to establish a real culture in this area with both men and women, praising, all the work done by the board of this Committee. “We have chosen within MAP to address the issue of parity through education,” said Hachimi Idrissi. “We have taken things seriously and we meet regularly around the Committee of parity to see what place the woman should have within MAP and improve its presence,” he said. Hachimi Idrissi also noted that MAP is a strategic public institution where the issue of gender enjoys special attention, advocating, in this regard, the need for the Committee of parity to work towards the development, for the coming years, of a strategic plan for parity. “One of the challenges is to know how to improve, together, our performance in terms of parity, that is to say: to imagine the paths to follow and the means to implement to achieve this end,” said Hachimi Idrissi. He expressed the wish to see this seminar of Marrakech constitute a turning point “in our perception of the parity and in the way we must find adequate answers to improve our performance in the matter”. Hachimi Idrissi also welcomed the existence within the Agency of a collective ambitious and important will that is assumed by the decision-making bodies of MAP, to promote and consolidate this policy of parity. “When there is such a powerful line of force and an assumed and collective ambition, we will achieve the expected results”, he assured, considering that MAP of the 21st century must be carried by its Women and Men. Addressing the issue of mobility, he also said that it embodies the very quintessence of MAP. Furthermore, MAP Director General highlighted some objective factors that stand as “barriers” behind the achievement of the expected parity and which are most often due to what he called “powerful cultural brakes”, referring, in this regard, to a certain macho culture and persistent discrimination against women. For her part, Nouzha Skalli, president of the Think-Tank “Awal” welcomed the initiative of the creation of a Committee of parity within MAP, which, she said, is in line with the implementation of the provisions of the Constitution, believing that parity is “a question of women and men, justice, efficiency and performance”. She also highlighted the great achievements made in Morocco in promoting women’s rights, thanks to the leadership of His Majesty King Mohammed VI. In a statement to MAP TV channel M24, Meryem Louali, chairwoman of the parity Committee within MAP, called this seminar “a high point” in this quest for parity, and an opportunity to celebrate the progress made in terms of parity. “The presence of women in decision-making positions is no longer at the stage of theory but at the level of implementation,” she said, lamenting the fact that “despite all efforts, the presence of women is still low in management positions and at the level of heads of divisions and regional and international poles”. Woman must free herself from the brakes that hinder her and make her career develop and flourish completely, she stressed. As part of MAP’s policy of training and improving human capital skills, implemented in collaboration with MAP Foundation, this seminar aims to promote awareness of the culture of parity, to create cohesion among the women beneficiaries of this training, to improve the “Soft Skills” that are supposed to help them better manage their teams and projects, and to better participate in the achievement of the Agency’s strategic projects.