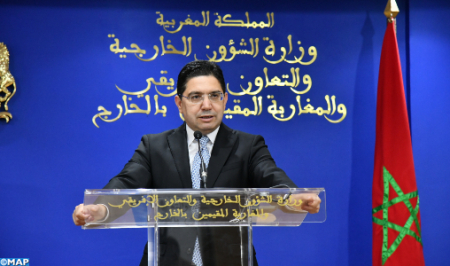 Minister of Foreign Affairs, African Cooperation and Moroccans Abroad, Nasser Bourita, on Wednesday welcomed the role played by Denmark in strengthening the relationship between Morocco and the European Union (EU). Speaking in a press briefing following talks in Rabat with Danish Foreign Minister Jeppe Sebastian Kofod, Bourita highlighted the importance Denmark attaches to EU relations with the Southern shore of the Mediterranean. “The visit of the Danish FM takes place while relations between Morocco and Denmark are experiencing a positive dynamic at all levels,” Bourita pointed out, noting that the two countries held a very fruitful political dialogue during the past year on bilateral and regional issues. Danish investments in Morocco and trade between the two countries have increased in the past few years, he said, adding that the two countries have decided to further develop these areas. This visit was an opportunity to underline the mutual support of the two countries in international fora, in particular at the level of the UN Security Council where Morocco will support the Danish candidacy for a seat in the UN decision-making body while Denmark will back that of Morocco, Bourita underlined. Talks also touched on the Moroccan experience in the fight against terrorism and extremism in accordance with the vision of His Majesty King Mohammed VI, said Bourita, noting that discussions focused on religious, economic and security aspects, as well as on the means to coordinate at the regional and international levels to fight against this scourge. The migration issue was also discussed along with the Kingdom’s clear vision regarding this complex phenomenon, which must be taken into account in all of these aspects, he concluded.