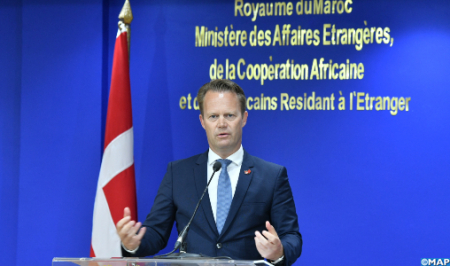 Denmark and Morocco share a “strong and solid” relationship that has been continuously reinforced over the past 15 years, Danish Foreign Affairs Minister Jeppe Sebastian Kofod said Wednesday in Rabat. Speaking in a press briefing following talks with Minister of Foreign Affairs, African Cooperation and Moroccans Abroad, Nasser Bourita, Kofod noted that his visit to Morocco is intended to explore the means to further develop bilateral relations. Regarding the Moroccan Sahara issue, Kofod stressed that his country, along with the European Union (EU), is in favor of a solution based on the UN process and negotiations, adding that Denmark has always had a consistent position on this issue and continues to advocate for a solution within the framework of the United Nations. The Danish minister commended Morocco’s management of the Covid-19 pandemic, noting that talks with his Moroccan counterpart also focused on the means to ensure a sustainable economic recovery. He also voiced his country’s readiness to support Morocco during the recovery stage, recalling in this regard the Memorandum of Understanding signed Tuesday with the United Nations Population Fund (UNFPA) in Morocco to strengthen the access of women and girls in vulnerable situations to essential rights and services and ensure their social and economic empowerment. On green energy, the minister said that “Morocco is at the forefront and has a great potential,” stressing that the two countries enjoy excellent cooperation in the energy sector. Commenting the fight against terrorism, Kofod deemed Morocco as “an important partner in the fight against extremism,” citing in this context its participation in the ministerial meeting of the Global Coalition to Defeat Daech, held this week in Rome. The Danish diplomat also congratulated the Kingdom for its co-presidency of the Global Counterterrorism Forum (GCTF). “We also discussed migration and the importance of joint efforts in this issue,” Kofod said, expressing Denmark’s willingness to support the Kingdom in the fight against illegal emigration. He also thanked Morocco for its efforts undertaken in this area.