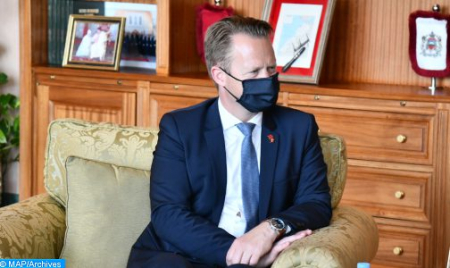 Danish Foreign Minister, Jeppe Sebastian Kofod, praised on Wednesday the efficiency of Morocco’s structural policies, which turned the Kingdom into a model to follow in the region. The Danish official made these comments during talks held in Rabat with the Head of Government, Saad Eddine El Otmani, says a statement issued by the Department of the Head of Government. The Danish top-diplomat praised the efficiency of Morocco’s structural policies, which made it a model to follow in the region at the political, economic and social levels, as well as in the area of environmental preservation, noting Morocco’s strong involvement in the development of renewable energies and the promotion of sustainable development, the source points out. The Danish FM voiced his country’s readiness to cooperate with Morocco within the framework of tripartite programs for the benefit of the African continent. The two officials welcomed, on this occasion, the relations of friendship between Rabat and Copenhagen as well as the convergence of the two countries’ views on several international issues of common interest, including climate change, sustainable development, promoting coexistence, tolerance and cooperation among peoples and addressing all forms of extremism, organized crime and terrorism.  The two sides expressed their will to step up economic cooperation and increase trade between the two countries. The two officials discussed, in this regard, the means to encourage investments, strengthen partnerships between economic stakeholders from the two countries and expand bilateral cooperation to new promising fields. Talks also touched on tripartite cooperation for the benefit of friendly African countries. In this context, El Otmani highlighted the pioneering Moroccan experience in this area and the efforts undertaken by the Kingdom within the framework of the African policy led by His Majesty King Mohammed VI, in order to support and keep pace with economic and social development in the African continent, through investing in the most important economic sectors and programs to build competencies, transferring expertise and enhancing good governance, as well as at the level of religious supervision and the spread of Islamic values of tolerance and coexistence. The two sides also discussed the two countries’ approach to addressing the Covid-19 pandemic and mitigating its repercussions. The Danish minister commended the Kingdom’s successful management of this pandemic, the release said, adding that the Head of Government recalled the proactive measures taken by Morocco upon the high Royal instructions, which enabled the country to control the spread of the pandemic, limit the economic and social repercussions triggered by the health crisis, support businesses and affected social sectors and launch a massive vaccination operation that has benefited nearly 10 million citizens so far, while undertaking large reforms and launching an ambitious economic recovery plan.