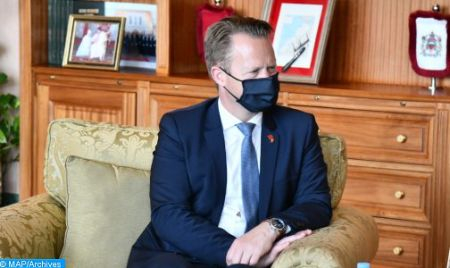 Danish Foreign minister Jeppe Kofod hailed, Wednesday in Rabat, the effectiveness of structural policies adopted by Morocco, which have made the Kingdom a “successful model” in the region. Kofod, who was speaking at a meeting with head of Government Saad Dine El Otmani, stressed that these policies “have made Morocco a model of success in the region at the political, economic and social levels, as well as in the field of environmental conservation”. Quoted in a statement by the Department of the head of Government, the Danish diplomat also highlighted the strong involvement of Morocco in the development of renewable energy and the promotion of sustainable development, all issues that offer broad prospects for cooperation. The Danish minister, who is on a working visit to Morocco as part of strengthening relations of friendship and cooperation between the two kingdoms, expressed the readiness of his country to support and cooperate with Morocco in the framework of tripartite programs for the benefit of Africa. During this meeting, the two parties welcomed the quality of Moroccan-Danish friendly relations and the convergence of views on a range of international issues of common interest, such as the fight against climate change, support for sustainable development, the dissemination of the culture of coexistence, tolerance and cooperation between peoples, in addition to the fight against all forms of extremism, organized crime and terrorism. The two officials also expressed their aspiration to raise economic cooperation and trade between the two countries to the level of their good political relations, according to the statement.