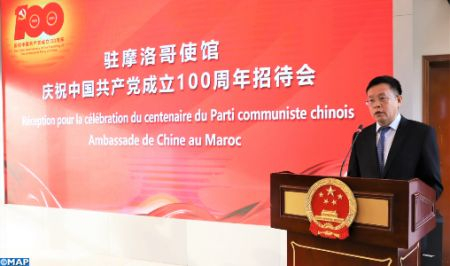 The ambassador of the People’s Republic of China to Morocco, Li Changlin, stressed, Wednesday in Rabat, the excellent level of political relations between the two countries, stressing the need to strengthen the economic partnership. “Political relations between China and Morocco are excellent,” the diplomat told reporters during a ceremony commemorating the centenary of the Chinese Communist Party (CCP), adding that the two countries share “a common approach” to major international issues. Morocco and China “advocate multilateralism and the principle of non-interference in the internal affairs of third countries,” just as they “are very attached to national sovereignty, territorial integrity and the right to development,” he said. The celebration of this anniversary is an opportunity to take stock of bilateral cooperation between China and Morocco, noted the Chinese diplomat, recalling the “historic” visit made in 2016 by His Majesty King Mohammed VI in China, during which the Sovereign and President Xi Jinping had signed a joint declaration concerning the establishment of a strategic partnership. This visit has given “a strong impetus” to bilateral cooperation, contacts have intensified since and the volume of trade has increased, he noted. “Relations have been very strong,” he said, emphasizing the establishment of “stronger” economic partnership, especially in the field of manufacturing, recalling for this purpose the significant investment of 350 million euros made by a Chinese company in its industrial unit in Kenitra.