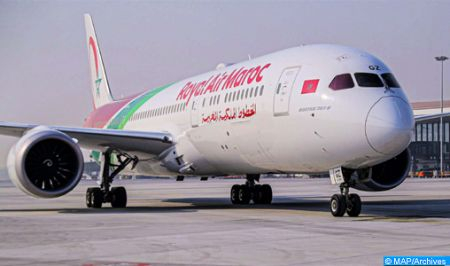 Morocco’s flag carrier Royal Air Maroc (RAM) announced, Thursday, the strengthening of its offer by mobilizing chartered aircraft during the 2021 summer season and by scheduling, from the beginning of July, nearly 1,400 additional flights with a total capacity of over 220,000 seats. This strengthening of the offer is part of the continuity of the exceptional operation launched since June 13, 2021 by RAM, pursuant to the High Instructions of HM the King. It aims to meet the strong demand of Moroccans around the world, says a statement by the national airline. In addition to strengthening the traditional air routes linking Casablanca and major airports in the Kingdom to Europe, RAM will launch 11 new direct routes linking Moroccan cities to major European cities, which have a high concentration of the Moroccan community in the world, according to the same source. In parallel with the strengthening of air routes that have a dense traffic, the national company will launch, from July 6, the Casablanca-Naples line at a rate of 2 frequencies (every Tuesday and Saturday). The Fez-Paris route will also be strengthened and 7 new routes are to be launched, namely Amsterdam, Brussels, Lyon, Toulouse, Montpellier, Bordeaux and Marseille. The program also provides for the strengthening of the flight program between Oujda and the French capital with a third daily flight. From now on, Oujda will be connected to Paris by 3 daily flights, that is to say 21 frequencies per week, adds the same source, specifying that the reinforcement also concerns Brussels with 6 frequencies per week instead of three and Marseille with 4 frequencies per week instead of two. In addition, RAM will launch the Tangier-Lyon route and reinforce the Tangier-Paris, Tangier-Amsterdam and Tangier-Brussels routes. The program for the summer 2021 season includes the launch of the Nador-Eindhoven (Netherlands) route and the strengthening of the Nador-Amsterdam, Nador-Brussels, Nador-Düsseldorf and Nador-Frankfurt links. As part of the strengthening of its flight program, RAM will charter several aircraft with an international company of reference. These latest generation aircraft are selected according to a rigorous process that complies with all safety and security regulations and standards, and approved by the civil aviation authorities of the countries where they operate. The national airline also reminds passengers who board its flights of the need to comply with the requirements set by the countries of departure and arrival, the statement says, noting that otherwise, RAM will be forced to deny boarding to passengers who do not meet these requirements. In particular, it recalls that some countries require the completion of online forms in advance, noting that country requirements are continually evolving. Royal Air Maroc provides its customers with a constantly updated link at the following address: https://conditionsdevoyage.royalairmaroc.com/, concludes the statement.