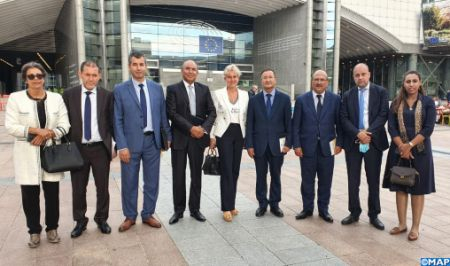 A large delegation of the Moroccan-EU joint parliamentary Committee (JPC), composed of members of both Houses of Parliament held, from Monday to Thursday, a series of meetings in Brussels with several MEPs. These meetings, held on the sidelines of the proceedings of the Committees on Foreign Affairs and Freedoms in the European Parliament, allowed the Moroccan delegation led by president of the JPC Chaoui Belassal, to highlight the importance of the Morocco-EU partnership and its particularity in the region, as well as the need to ensure the consolidation of the quality and momentum of this privileged partnership. On this occassion, the Moroccan MPs explained to their European counterparts the need to manage the crisis between Morocco and Spain in a bilateral framework dissociated from the multidimensional Moroccan-European cooperation, and insisted on the importance of enhancing this partnership in the context of the handling of the migration issue. They also underlined the permanent and deep-rooted will of Morocco to maintain a continuous partnership that preserves the mutual interests of the two parties. In this regard, the Moroccan MPs have sensitized their European counterparts to carry these aspirations and share them within the European Parliament’s Committees on Foreign Affairs and Freedoms in order to ensure the conditions for a balanced dialogue. These proposals have found a positive resonance among MEPs who welcomed the initiative of the JPC given the importance of parliamentary diplomacy in the continuous and permanent exchanges that must clarify in an anticipated and proactive way the issues and Moroccan views to all MEPs. The Moroccan and European parties, who share the same points of view regarding the multiple issues that prevail in the Mediterranean region, have agreed to continue their discussions during the next sessions of the European Parliament Committees.