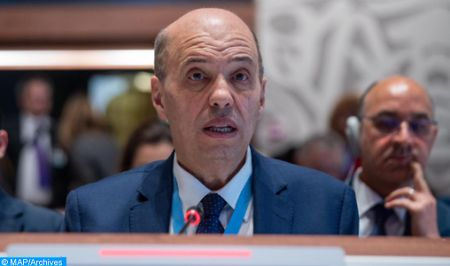 Morocco’s ambassador to the United Nations Office in Geneva, Omar Zniber, categorically denied on Thursday the allegations contained in the statement of the Special Rapporteur on the situation of human rights defenders. In a letter addressed to the Special Rapporteur, Zniber expressed “the great surprise and amazement” of the Permanent Mission of the Kingdom, following the publication of this statement “whose content and terms do not fit at all with the framework of dialogue and mutual respect discussed and agreed upon, in particular during the last working session held on April 30, 2021”. He recalled that “the persons who are the subject of the statement, in part, have been convicted by the Moroccan judiciary, for serious crimes committed, including the assassination of representatives of the forces of law and order, a conviction pronounced by an independent judiciary and in the presence of international observers, having recognized clearly and impartially, the validity of the procedure that led to these convictions”. With regard to the others as well, the Mission, he added, “has already transmitted written elements, answers from the authorities, which as you yourself have recognized, interact with all the procedures, in an honest and responsible way, unlike some parties that want to undermine the Kingdom of Morocco and its territorial integrity.” “You will understand that the content of your statement, referring to so-called associations for the liberation of colonialism or political activists whose action you consider peaceful, benefits the separatists, and strengthens them in their continuous provocations, for the sole purpose of making propaganda and harassment, including vis-à-vis a number of special procedures, including yours,” he noted. The ambassador also expressed great concern that “the statement of the rapporteur interferes with the ongoing debates in the framework of the 47th Session of the Human Rights Council, which since the beginning of this Session, are marked by a verbose and aggressive violence of the representative of Algeria and interested supporters of the separatists, against Morocco”. He indicated that he had already insisted on the serious error committed in the previous communication of the Special Rapporteur, on the undue sharing of her communication, and “that you also recognized as an error on your part, in the exchanges we had, on April 30, already pointed out in this letter”, he stressed. Zniber asked the rapporteur, on the basis of impartiality and the code of conduct governing her mandate, to also make public the elements that were transmitted to her, and “which cast doubt on and categorically deny the allegations to which you refer in your statement”. He also asked the Special Rapporteur to “share the contents of this letter with the mandate holders indicated in your statement”.