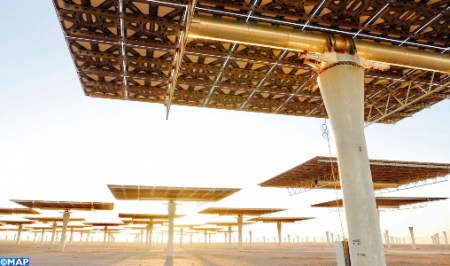 HM King Mohammed VI has taken an active role in promoting sustainable development in Morocco and North Africa, underlines European weekly magazine ‘New Europe’. The publication, which has published an article on the launch by Morocco and the EU of a “Green Partnership”, stresses that the pro-active and hands-on approach of the Sovereign towards innovative development “was reflected in the joint statement issued by both parties where the European Union expressly noted Morocco’s efforts to fulfil the core elements of the Green Partnership.” “For Europe, the expected cooperation with Morocco will be the first of its kind with a country located on its southern flank and is part of the 2019 EU-Morocco Partnership for Shared Prosperity to enhance the relationship between Morocco and the European Union, which are in line with the goals laid down by the European Neighborhood Policy,” the source points out. The Green Partnership is aimed at ensuring consistency in our work with regional and international frameworks such as the 2030 Agenda, the United Nations Conventions on Biological Diversity and Desertification, the Regional Platform of the Union for the Mediterranean on energy and industrial cooperation and the Barcelona Convention for the Protection of the Mediterranean Sea Against Pollution,” the publication says, quoting the joint statement. “Our meeting is important because it comes on the cusp of post-crisis recovery; that is, the right time to learn the lessons,” New Europe says, quoting the Moroccan FM, Nasser Bourita. “The way out of the crisis is an opportunity to “build back better”, avoiding the mistakes of the past. It is an opportunity for an open and cooperative approach, with the help of all,” Bourita pointed out during the launch ceremony marking the signing of the agreement. “The new Green Partnership should be: a Partnership for a “green recovery”, swift, fair and win-win. In short, a partnership that would contribute to “greening” our economies more, to further diversify their growth engines, and to get closer to the new mapping of post-crisis international value chains,” according to the minister. Bourita also recalled that the Green Partnership is fully consistent with the Strategic Orientations defined by His Majesty King Mohammed VI, noting that these royal orientations have made environmental and climatic issues an active deployment axis that is permanently at the heart of public policies, internally and in interactions with partners.