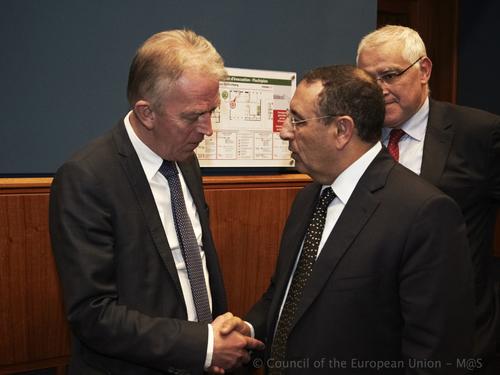 The European Union has renewed its calls for a lasting political settlement of the Western Sahara conflict. In a final statement issued at the end of the 10th session of the Morocco-EU association council, held in Luxemburg, the EU said it encourages all the parties to continue to cooperate with the UN secretary general’s personnel envoy to progress in the search of a solution and to show realism and a spirit of compromise.
The EU reaffirmed its full support for the UN efforts seeking to help the parties reach a political just, lasting and mutually acceptable solution. The EU also expressed its attachment to the respect of human rights and underlined the responsibility of every party on the matter. It hailed the setting up, as provided for in the Constitution, of the Moroccan National Human Rights Council (CNDH) and the consolidation of its role in monitoring and upholding human rights, including in the Sahara.
Morocco explained its standpoint on the issue during this 10th session of the Morocco-EU association council, held under the co-chairmanship of Moroccan junior Foreign Affairs Minister, Youssef Amrani, and Danish Foreign Minister, Villy Sovndal, whose country currently holds the EU rotating presidency.

The Moroccan delegation recalled that the UN Security Council had defined, since 2007, the key parameters for the settlement of the regional dispute on the Western Sahara, describing as “just and fair” the Moroccan autonomy proposal while insisting on the need to pursue the negotiations as the only way to solve this conflict. Morocco recalled, once again, the obligation of Algeria, as the host country of the Sahrawi refugee camps of Tindouf, to allow the UNHCR to identify, register and conduct a census of the Sahrawi populations, in line with the 1951 Geneva Convention and the 1967 protocol relating to the status of refugees, and with the Security Council resolution 1979.
The European approach falls in line with the orientations of the UN Secretary General and the Security Council, which recommend a negotiable and mutually acceptable political settlement for the conflict artificially created about Moroccan Sahara.