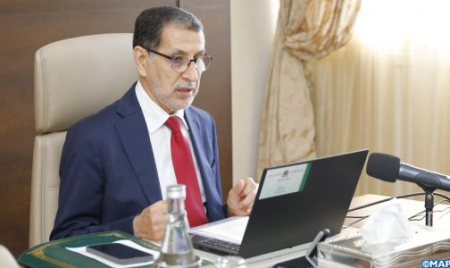 The Government Council, chaired Thursday by the Head of Government Saad Dine El Otmani, followed a presentation by the Minister of State for Human Rights on the implementation of the National Action Plan for Democracy and Human Rights. On this occasion, the minister of State highlighted the main stages of development of the Plan, the methodology adopted for its establishment, the overall assessment of its implementation, as well as several recommendations relating to the outlook of the action plan, says a statement issued at the end of the Government Council. The Minister of State underlined that this action plan benefited from a high royal solicitude and was welcomed at the international level by the Office of the United Nations High Commissioner for Human Rights, and was also backed by international stakeholders. The Plan, which is the result of collective and participatory work between different actors, is a national framework of human rights policy aimed at promoting the Moroccan experience in the area of the protection and promotion of human rights. It is intended to strengthen democracy at the institutional, legislative and practical levels, he explained, noting that the Plan aims to enshrine human rights as the basis of the rule of law. Within the framework of the implementation of the High Royal Guidelines, the State Ministry has started to develop the methodology and the approach for the implementation of the national plan, as it oversaw the preparation of the execution plan in coordination with government departments and national institutions, he said. This process led to the presentation of this action plan to the High Appreciation of His Majesty King Mohammed VI on March 19, 2019, he recalled. He also observed that the data relating to the progress report of the implementation of the national plan indicates that 88% of the total measures have been initiated, of which 17% have been fully completed and 71% are in the process of being implemented, most of them at an advanced stage, adding that 12% of the measures have not yet been implemented. He also pointed out that the context of the Covid-19 pandemic requires the strengthening and consolidation of measures aimed at improving the access of the most vulnerable categories to their fundamental rights. In order to give new impetus to the implementation of the Plan, the State Ministry proposes to extend the period of its implementation by four years (2022-2025), to adopt the decree establishing the National Committee monitoring the implementation of the National Action Plan, to update the operational plan according to new requirements, as well as to strengthen the territorial implementation of the plan and consolidate the roles of territorial actors in the area of the protection and promotion of human rights.