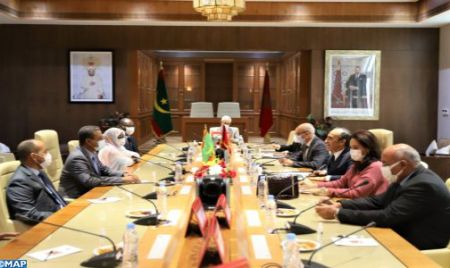 Speaker of the House of Representatives, Habib El Malki, held on Monday in Rabat, talks with chairman of the Bureau of the External Relations Committee of the Mauritanian National Assembly, Mohamed El Mostapha Mohamed Lemine Zeidane, which focused on ways to strengthen cooperation relations between the two legislative institutions. Fraternal relations between Morocco and Mauritania are based on common history, as well as on the unity of religion, language and civilization, said El Malki, according to a statement by the House of Representatives, explaining that the two countries are animated by a sincere desire for fruitful cooperation. He recalled the phone conversation between His Majesty King Mohammed VI and His Excellency Mohamed Ould Cheikh El Ghazouani, President of the Islamic Republic of Mauritania. The region needs sustainable development “which cannot be achieved without ensuring security and stability, based on the preservation of the territorial integrity of States,” stressed the Speaker of the House of Representatives, indicating that the Sovereign has put in place a renewed strategy for South-South cooperation, as well as for the partnership especially with African countries. “The Maghreb region still suffers from a weakness in economic integration,” he noted, explaining that “2% of the GDP of member countries is lost due to the absence of a Maghreb union”. For his part, the Mauritanian official explained that his visit to the Kingdom, leading a parliamentary delegation, is part of the consolidation of cooperation relations between the two legislative institutions and strengthening the bilateral exchange of experience and expertise, welcoming the “developmental renaissance that Morocco is experiencing in various fields”. Mohamed El Mostapha Mohamed Lemine Zeidane emphasized the importance of Moroccan investment in Africa, calling for more Moroccan investment in Mauritania and strengthening economic and trade between the two countries.