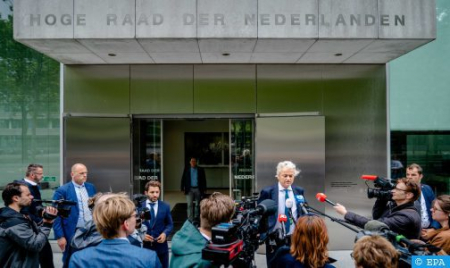 The Dutch Supreme Court confirmed on Tuesday the conviction of the far-right leader Geert Wilders for discrimination against the Moroccan community. Prosecuted several times for inciting racial and religious hatred and discrimination, Geert Wilders, leader of the xenophobic and europhobic “PVV” party, had promised in 2014 “fewer Moroccans” in the Netherlands. He had been convicted on appeal for “collective insult” in September 2020. With his remarks, Wilders “offended a whole group of people”, “because of their origin”, said the Dutch Supreme Court judge, Vincent van den Brink. “The conviction of the suspect, PVV leader Wilders, after his statements about fewer Moroccans, remains in force,” he said. The Supreme Court also confirmed the decision of the Court of Appeal not to sentence the Dutch far-right leader. Geert Wilders’ Islamophobic and xenophobic rhetoric has caused controversy in the Netherlands for several years. The leader of the PVV, the third largest party in the Dutch parliament, also advocates the withdrawal of the Netherlands from the European Union and a return to national borders.