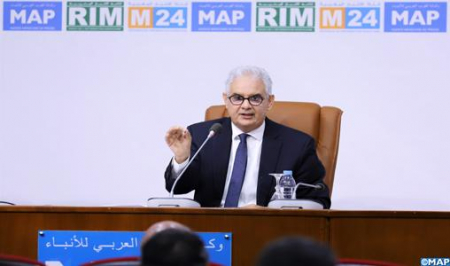 The Royal decision to manufacture in Morocco the COVID-19 vaccine and other vaccines is part of the strategic orientation of the Kingdom as an active regional force for the promotion of the interests of the Continent, said Wednesday the Secretary General of the Istiqlal Party, Nizar Baraka. Baraka, who was the guest of MAP Forum held on the theme “the Istiqlal Party facing the challenges of the national political and partisan landscape”, underlined that a new dynamic has started which places Morocco as an active regional and continental force that can play a fundamental role within its Arab and Euro-Mediterranean environment. The politician mentioned in this regard the launch of the project to manufacture the COVID-19 vaccine in Morocco, which aims to strengthen the country’s health sovereignty and the Kingdom’s new geostrategic orientation. Baraka noted that the Kingdom will become among the few countries which have the capacity to produce the COVID-19 vaccine and other vaccines, noting that this pioneering project is expected to strengthen the health sovereignty of the Kingdom and consolidate health diplomacy at the continental level. MAP forum is a platform for debate on current political, economic, cultural and social issues.  Representatives of public authorities and personalities from various backgrounds as well as media representatives take part in this gathering.