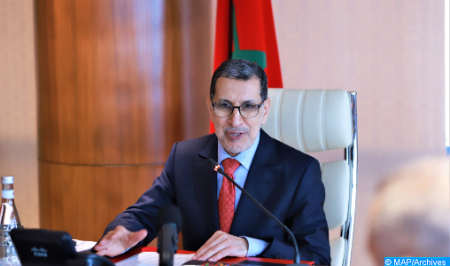 The Head of Government, Saad Dine El Otmani, on Monday held talks in Rabat with a delegation from the Bureau of the External Relations Committee of the Mauritanian National Assembly, led by its President Mohamed El Mostapha Mohamed Lemine Zeidane. This meeting was the opportunity to highlight the long standing ties between Morocco and Mauritania and the fraternal relations between the two peoples, which constitute an essential pillar to boost bilateral cooperation and step up the Moroccan-Mauritanian partnership in several areas, said a statement from the Head of Government’s Department. El Otmani reaffirmed, on this occasion, Morocco’s will to strengthen good neighborly relations and cooperation with Mauritania as well as coordination in order to address common challenges in the areas of development, economy and  security. He also underlined the Kingdom’s determination to share with sister African nations its successful experiences in the various areas of economic and social development, noting that Morocco is working for the accompaniment and support of development in the Continent through several projects and investments. For his part, the Mauritanian official, who is visiting the Kingdom with the aim of promoting the relations of partnership and cooperation between the two countries, expressed the great esteem of his country towards Morocco, noting that Mauritania seeks to consolidate cooperation and partnership relations in vital areas, in particular agriculture, fisheries and training. Mr. Mohamed El Mostapha Mohamed Lemine Zeidane expressed Mauritania’s willingness to develop cooperation between the legislative institutions of the two countries and to exchange expertise in this area.