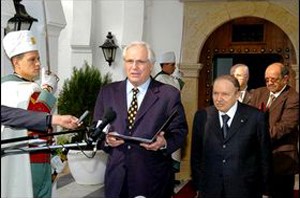 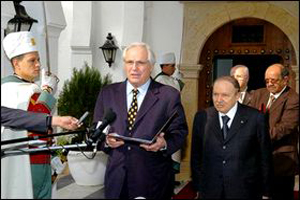 Elections or no elections, Algerian officials, manipulated by the old army generals who pull the strings behind the scenes, do not want to see relations with their Moroccan neighbor normalized. For the Algerian regime, everything is negotiable except normalization with Morocco or a final settlement of the Western Sahara conflict.
The crystal clear evidence to this stance was given by the Foreign ministry’s Spokesman , Amar Belani, in a statement he made on Thursday.
” Algeria,” he told AFP, “has always supported the tireless efforts made by Ambassador Christopher Ross to help the two parties, Morocco and the Polisario Front, in the search for a just, sustainable and mutually acceptable political solution which provides for the self-determination of the people of the Western Sahara “. The Algerian message is therefore crystal clear: the partition of the Moroccan territory or nothing.

Algiers’ response came just after Morocco announced it was withdrawing its confidence from the UN envoy, Christopher Ross, because of his “biased and unbalanced” positions. The situation seems quite serious for Algeria. Actually, instead of entrusting some of its media with carrying out the dirty job, as it used to do, this time, it is the very official Algeria which came to the forefront to express its response to Morocco’s decision, even prior to the response of the Polisario, the seemingly first concerned party.
Bottom line, Algiers is afraid of losing a man who plays the role of the defender of the Sahrawi separatists’ cause.
On the Moroccan side, the Islamists heading the government strongly believed that brotherhood, neighborliness, shared history and blood bonds would help clear out the atmosphere with the Algerian neighbor. By now, they have probably realized that they knocked at the wrong door.
According to pundits, as long as the clan of the late Houari Boumediene holds the reins of power in Algiers, the status quo will prevail, otherwise how can you explain that borders between the two neighboring countries have been closed for 18 years because of an incident that is somehow banal?  The truth is that Morocco disturbs, in many respects, the Algerian Nomenklatura, to such an extent that the Algerian rulers, and especially the military leaders, have one dream: to see Morocco completely destabilized or balkanized. Let them dream… Dreams are free.