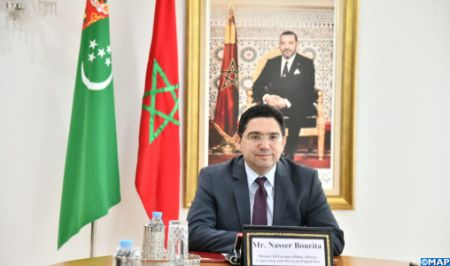 Turkmenistan, through its deputy Prime Minister and Minister of Foreign Affairs, Rashid Meredov, reiterated on Thursday its support for the Moroccan autonomy proposal for the Sahara. “Rashid Meredov reiterated Turkmenistan’s support, already expressed during his visit to Morocco in 2020, to the Moroccan autonomy proposal as well as to the efforts of the United Nations to reach a political, lasting and mutually acceptable resolution of the artificial conflict over this regional dispute”, said a statement by the Ministry of Foreign Affairs, African Cooperation and Moroccans Abroad, issued at the end of the fourth session of Political Consultations between Morocco and Turkmenistan, at the level of Foreign ministers, which took place by videoconference. On this occasion, Minister of Foreign Affairs, African Cooperation and Moroccans Abroad, Nasser Bourita, held talks with Rashid Meredov. During these consultations, the two ministers welcomed, first of all, the excellent level of the relations between the two brotherly countries and insisted on the need to raise them to the level of the aspirations of HM King Mohammed VI and President of Turkmenistan, Gurbanguly Berdimuhamedov, underlined the statement. On this occasion, Bourita and Meredov adopted a new roadmap that outlines the cooperation between the two countries during the period 2022-2023 and agreed to hold soon, in person, when the health situation allows, the first session of the Joint Commission of Cooperation. At the multilateral level, both parties welcomed the excellent collaboration, mutual support and coordination of positions within regional and international organizations, particularly at the level of the Organization of Islamic Cooperation. Meredov thanked Morocco for its membership in the “Group of Friends of Neutrality for the Promotion of Peace, Security and Sustainable Development”, created at the initiative of Turkmenistan. The Turkmen Minister also renewed the invitation to Bourita to make an official visit to Turkmenistan, the dates of which will be determined by mutual agreement.