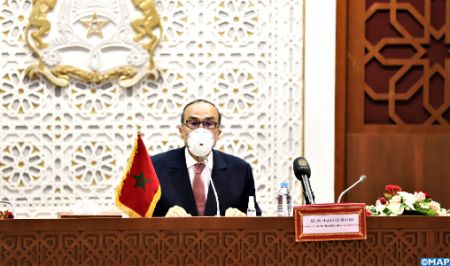 The insistence of some parties to prevail narrow political agendas is one of the most important impediments to the African institutional unity, said, Thursday in Rabat, speaker of the House of Representatives, Habib El Malki. “One of the most important obstacles to the institutional unity of our continent is the insistence of some parties to prevail narrow political agendas, contrary to the objectives of the African Union and its institutions and which do not express our collective will to rebuild our prospects and orient us towards a future that we must build all and collectively, “said El Malki, who was speaking at the opening of the consultation meeting of speakers of African parliaments. He noted, in this regard, some shortcomings within the Pan-African Parliament, including the actions of the acting president who abuses his position to adopt resolutions that unfairly serve the political interests of some countries, knowing that this position is supposed to be reserved for current affairs until the election of a new president and this, according to the rules of procedure. These actions are a clear indicator of the absence of institutional censorship and evidence of the legal vacuum that negatively impacts the credibility of this institution, he lamented. Shortcomings at the 4th ordinary session of the fifth legislature of the Pan-African Parliament, held in Midrand (South Africa), from May 20 to June 4, contradict the spirit of democratic practice and internal democracy, and infringe on the freedom of members of the Pan-African Parliament to choose their president and their representatives in the various bodies of this prestigious institution “at a time when we all aspired to remedy the delay in the proceedings of our institution resulting from the exceptional global health situation,” he regretted. “The repetition of such irresponsible practices in the Pan-African Parliament risks exacerbating the crisis of confidence between African voters and their representatives and may destroy their hopes for a Parliament that discusses and resolves the problems of the African citizen and embodies the values of democracy, namely freedom of choice and refraining from controlling institutions and directing them to serve personal agendas and state egos that do not serve the great continental project,” said El Malki.