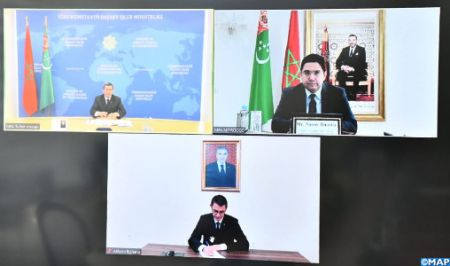 Deputy Prime Minister and Minister of Foreign Affairs of Turkmenistan, Rashid Meredov, hailed, Thursday, Morocco’s exemplary management of the response to Covid-19, under the leadership of His Majesty King Mohammed VI. This stance was expressed during a videoconference with minister of Foreign Affairs, African Cooperation and Moroccans Abroad, Nasser Bourita, as part of the fourth session of Political Consultations between Morocco and Turkmenistan, at the level of Foreign ministers. For his part, Bourita praised the good management by Turkmenistan of the Covid-19 crisis and the initiative launched by the Turkmen President to establish an “International Council of Medical Scientists”, which would serve as a platform for dialogue on new health and medical challenges, said a statement by the ministry of Foreign Affairs, African Cooperation and Moroccans Abroad. The two ministers called for the intensification of exchanges of visits of senior officials and parliamentary delegations in order to strengthen political dialogue and consolidate bilateral cooperation. They also agreed to focus, initially, on the development of cooperation in the sectors of petrochemicals, agriculture, fertilizers, tourism and health, and stressed the importance of accelerating the finalization of draft bilateral agreements relating to the fields of taxation, agriculture, crafts and railways. Bourita and Meredov, who reiterated the interest to strengthen economic and trade relations, also agreed to promote investment and establish a Morocco-Turkmen Business Council. The two parties stressed, moreover, the importance of socio-cultural exchanges and strengthening the bringing together between the two friendly peoples, through participation in cultural events and international festivals organized in each of the two countries. In this regard, the two ministers agreed on the celebration, next year, of the 30th anniversary of the establishment of diplomatic relations between Morocco and Turkmenistan, through the programming of actions and events reflecting the depth of the friendship that binds the two peoples, the statement added. The two parties agreed on the strengthening of student exchanges, through the reciprocal granting of educational places in Moroccan and Turkmen institutes and universities for the benefit of students from both countries.