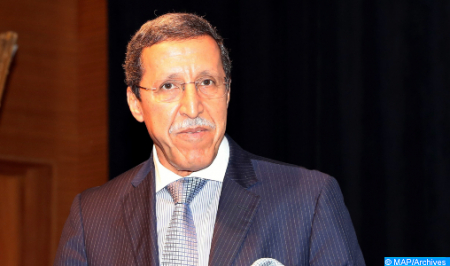 The Permanent Representative of Morocco to the UN, ambassador Omar Hilale, on Thursday chaired a high-level virtual meeting to celebrate the fifth anniversary of the Marrakesh Treaty to Facilitate Access to Published Works for Persons Who Are Blind, Visually Impaired or Otherwise Print Disabled. Co-organized by Morocco and the World Intellectual Property Organization (WIPO), this meeting, which was held on the sidelines of the United Nations High Level Political Forum on Sustainable Development, was an opportunity to initiate a debate linking the five continents, going from New York to Geneva, Rabat, New Delhi, Auckland in New Zealand and Santiago in Chile. The meeting was marked by the participation of the Minister of Culture, Youth and Sports, Othmane El Ferdaous, the Director General of the World Intellectual Property Organization (WIPO), Dareng Tang, UN Special Envoy on Disability and Accessibility, María Soledad Cisternas Reyes, Deputy Secretary of India’s Department for Promotion of Industry and Internal Trade, Sahilendra Singh, and President of the World Blind Union, Martine Abel-Williamson. This event was an opportunity to assess the implementation of the Marrakesh Treaty and to celebrate its great added value and the “light” it has brought to the lives of thousands of people who are blind, visually impaired or unable to read. This Treaty stems from the series of standard limitations and exceptions relating to copyright that it sets out and promotes the availability of accessible formats/books as well as cross border exchange of formats for the people concerned. On this occasion, El Ferdaous highlighted the achievements of Morocco in the implementation of this treaty and underlined, in this regard, the solicitude of His Majesty King Mohammed VI towards people with special needs, including persons who are blind, visually impaired or otherwise print disabled, so as to protect their rights and ensure them a decent life. For his part, Ambassador Hilale said that the diplomatic conference leading to the adoption of the Marrakesh Treaty, organized by Morocco in 2013, was a historic event not only at the level of WIPO but also with regards to international law for the visually impaired. He also recalled the Kingdom’s conviction, under the enlightened leadership of HM the King, that true inclusion of people with special needs requires the elimination of obstacles to their integration into society at all levels, by providing them with the necessary means to enjoy a decent life and easy access to all services on an equal footing. The participants in this meeting unanimously underlined the relevance of the acceleration of the implementation of the Marrakesh Treaty, in particular in the current context marked by the health crisis of COVID-19 which has affected the poorest and most vulnerable categories of the population, including people with special needs. They also stressed that this international instrument has a crucial humanitarian dimension and constitutes a real catalyst for the rights of the visually impaired. This high-level event ended with the launch of a double appeal: the imperative to step up international action to ensure the full integration of the blind, visually impaired and those who are print disabled, in accordance with the Marrakesh Treaty and other related relevant strategies, in addition to a call for the universalization of the Treaty, through its ratification by all the Member States of the United Nations.