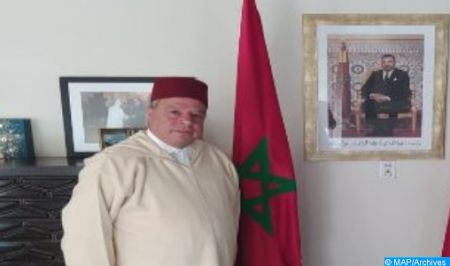 Morocco’s ambassador to Mexico, Abdelfattah Lebbar, highlighted, in an interview with the Mexican channel “ADN 40”, the potential for development of economic relations between the two countries, stressing that the Kingdom is one of the most important and dynamic economies in Africa. Praising the friendly relations between Rabat and Mexico City, the ambassador called to work further for their development, noting that today, more than ever, “there is a great desire to strengthen our bilateral relations (…)”. However, Lebbar noted that the potential of these relations is not yet sufficiently exploited by both parties. Asked about the economic assets and political stability enjoyed by Morocco, the diplomat stressed that “Morocco is one of the most important and dynamic economies in Africa. This is thanks to the attractiveness of our country and the economic and social reforms initiated by His Majesty King Mohammed VI since His enthronement”. Morocco has become a pole of attraction for foreign investment thanks to its economic dynamism and political stability that predispose it to become a strategic partner, serious and credible for the Latin American region, said the ambassador. Referring to the opportunities for Mexican investors in Morocco, the ambassador said that Mexico currently has diplomatic relations with most of the 21 Arab countries and Morocco is the gateway to this important group, adding that the economic dynamism of Morocco in Africa is also a geo-economic incentive for Mexican investors. “Today, Morocco is the first Arab economic partner and the second African partner of Mexico, but there is much more. The automotive and aerospace industries, as well as tourism, are considered interesting opportunities for our two countries. The opportunities are numerous and we must take advantage of them,” he said, assuring that “this potential for exchange can be multiplied if certain obstacles are overcome”. On the issue of the territorial integrity of Morocco, the ambassador recalled the historic decision of the United States of America to recognize the full sovereignty of Morocco over its Sahara, noting that the Moroccan autonomy initiative presented by Morocco has the full support of the population of the southern provinces of the Kingdom and the international community. “It is the only serious and credible solution to end a conflict that has lasted too long, within the framework of sovereignty and territorial integrity of the Kingdom,” he said.