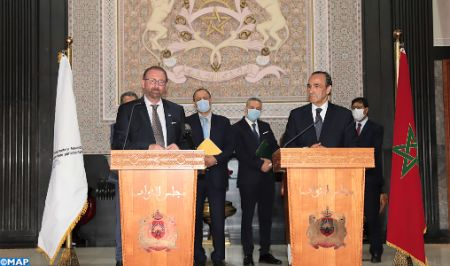 Morocco is an example par excellence as regards the progress made in Africa in terms of human rights, fundamental freedoms and in the context of the rule of law and democracy, stressed, Monday in Rabat, president of the Parliamentary Assembly of the Council of Europe (PACE), Rik Daems. “It’s been ten years that we are together in the partnership for democracy,” said Daems at a press briefing after a meeting with speaker of the House of Representatives, Habib El Malki, adding that “we will work together to strengthen this partnership since there are some topics that we can address more”. The European official, who reported much progress in this partnership, said that a report will be prepared shortly by the Assembly to examine ways to expand this partnership, noting that the Moroccan delegation within the Council of Europe and the assembly is one of the most active. He also welcomed the work done by the Moroccan delegation, expressing confidence that “we can further develop this partnership for democracy. For his part, El Malki said that the visit of the president of PACE coincides with the 10th anniversary of the Partnership for Democracy uniting the Assembly and the Moroccan Parliament, noting that it was an opportunity to address the evolution of relations between the two parties, especially with regard to the opening of new opportunities to consolidate bilateral cooperation.