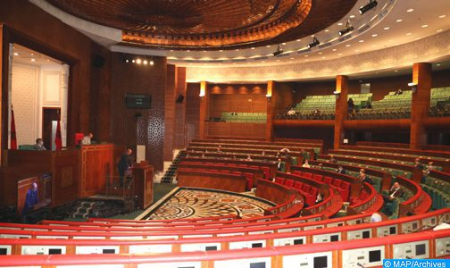 The positions of the parliamentary groups of the majority and the opposition in the House of Advisors diverged on the progress report of the government’s action, as evidenced by their speeches, on Wednesday, as part of the plenary session devoted to this subject. Thus, while the majority groups welcomed the government’s progress report, the opposition criticized the executive’s lack of creativity in finding appropriate solutions to a number of problems, especially in the economic and social fields. In this regard, the Justice and Development group described the government’s record as “very honorable”, having enabled Morocco to succeed in many challenges and to continue and launch major structural reforms, welcoming the achievements of the government in terms of supporting social protection and cohesion through the increase in the number of beneficiaries of social assistance programs, the creation of a system for targeting aid recipients as well as the establishment of a single social register and a national population register. For its part, and after having referred to a set of government initiatives in the economic and social fields, the Haraki group stressed that by virtue of the constructive criticism, the results, despite the appreciated efforts, have not met the high expectations in the area of ​​justice and spatial equity, which is reflected in the continued centralization of public and private investments in certain regions. For its part, the group National Rally of Independents highlighted the achievements of the Kingdom under the current government mandate, believing that its record is “positive, distinguished and honorable”, because thanks to its action it has been possible to overcome the most difficult ordeal that Morocco and the world have been able to go through, which has exhausted the economies of the countries and has had serious socio-economic repercussions. For its part, the Socialist group noted that Morocco has posted significant achievements in the economic and financial fields, investments in basic infrastructure, in addition to the inauguration of major economic development projects, stressing that the pandemic of Covid-19 has had a major impact on the pace of development and job creation. On the other hand, the Authenticity and Modernity Group (opposition) welcomed the success stories achieved over the past ten years in Morocco, the most recent of which concerns the efforts made to fight the Covid-19 pandemic and administer vaccines. However, the Group noted that several constitutional mechanisms were available to the government to carry out its program, regretting that their use would have led to greater success. The Opposition Group also referred to some failures, especially with regard to debt and the growth rate, stating that the government had pledged to achieve an annual growth rate of 5.5%, instead of 1,7 registered for the past four years. For its part, the Istiqlalian Group of Unity and Egalitarianism noted that it would have been more appropriate for the government to practice self-criticism to recognize its inability to find solutions to citizens’ problems.